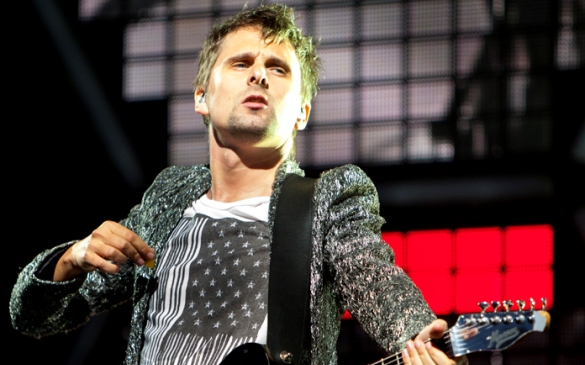 Matthew Bellamy of Muse performs at Outside Lands.
(Credit: Robert Redfield; Redfield Pictures)
Outside Lands returned to its three-day format this year, and it seems like it was what the masses wanted. Saturday’s turnout was by far the most I’ve ever seen at this event since it started three years ago. The weather was good, and the lineup as eclectic and diverse as ever; hipsters, hippies and techno kids all had something to look forward to.

I got started Friday with the Original Meters on the Lands End main stage. Although they haven’t played together much since 1977 you wouldn’t have guessed it. Their classic New Orleans sound mixing funk and R&B was great. I didn’t know much of their material, but it was hard to keep from tappin’ your foot and shaking your hips. You could tell these guys had a long musical relationship, and they quickly resumed where they left off in 1977. Next on the big stage was MGMT. They had just played a show earlier in Big Sur at the Henry Miller Library and made reference to it as being one of the highlights of their lives. I have seen them a few times and never been that into it, but the thousands of kids in face paint and headbands seemed to help me out. They powered through their big hits and were tight as usual. Any band that has a song referring to Brian Eno is OK in my book!

Then came Phish; by the amount of tie-dyes and hula-hoops in the crowd, SF was ready for this band. They played two sets back to back, and well, that's a lot of Phish. Not really being a fan, I have to say these guys ripped! Trey Anastasio was amazing on the guitar and his famous “O” face made more than one appearance. I wish I knew more about them because their shows feel like one big inside joke that I wasn’t in on. Their lyrics are hilarious. Songs like “Fluffhead” and “Possum” had the whole field chanting along. They really turned it on during the second set, and it was now dark so you got the full experience.

From there, I headed to Best Coast. They were playing on the smallest stage at the venue, Panhandle, but should have been on one of the larger ones. It was beyond packed for this; I seriously had to do some pushing and shoving to get anywhere close. Their sound was awesome and even though I only knew the radio hits, I loved it. Bethany Cosentino’s voice is great. They make you just want to lie on the grass and soak up their laidback tunes. The crowd went nuts for their hit “Sun Was High,” as I assume most of them were as well.

My favorite set by far was the Black Keys on Saturday – had to be 60,000 people for them, more than any other band I’ve ever seen at OL, even for the great Radiohead. The stage was adorned with a giant dream catcher and a huge blow-up tire, dwarfing the two men on stage. In classic Black Keys tradition they started the set with just the two of them ripping into “Grown So Ugly,” and the place exploded. They soon brought in a bassist and keyboardist to do the newer stuff, including “Howlin’ For You” and “Tighten Up.” I’ve seen them many times before, and they are at their peak without a doubt. To keep the old-school fans happy they stripped back down to a two-piece and finished the show off with more classics. Honestly, they could have played all night and I would have been happy – an American classic in the making.

At the end of the night, I watched Muse perform their first few songs – great light show and good sound, but it wasn’t my thing. I had heard the buzz about Girl Talk and thought I’d check it out. By the time I got to the stage a few songs into the set, it was packed. I was stunned by the riffs of Black Sabbath with Beyoncé mashed over the top. It was like a dance party on steroids; thousands of people dancing, the equivalent of a packed nightclub on a Saturday night. It reminded me of sitting in front of your TV with the remote control, watching 20-30 second clips of songs we all know and love in a fun and exciting arrangement. As much as I’m not into DJs, it was the most fun I’ve had in a long time. I can’t recommend Girl Talk enough. He had at least 30 people onstage from the crowd dancing with balloons and toilet paper rolls flying through the crowd. It was an adult birthday party with all your favorite hits – truly something for everyone.
Article posted on 8/23/2011
This article has been viewed 1131 times.