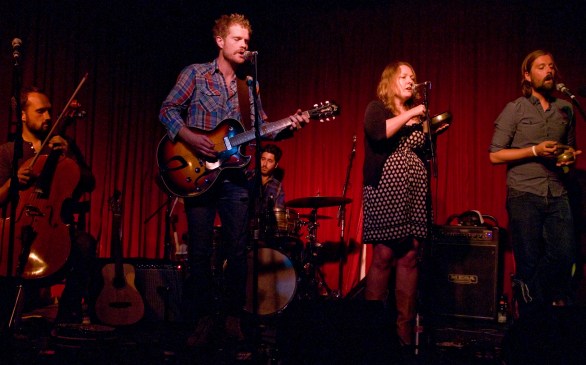 One of my favorite venues has become the Hotel Café, and for good reason: The bands that they bring in never disappoint. The Wilderness of Manitoba fit in perfectly at the intimate venue. Truth be told, from the music I listened to before the show and the timid way they approached the stage, I was expecting a very quiet performance. I was happily surprised though when their music was all encompassing and filled the venue with resounding and powerful beats. Citing chamber folk as their genre, the band does not seem to fit into just one milieu and they skillfully take on many instruments throughout their show.

The group’s melodies and songs seem to have a sad and melancholy undertone to them and tell stories in keeping with their folk background. Each song was followed by a quiet “Thank you” from vocalist, Melissa Dalton who shielded her eyes to see the fans in the audience. “When You Left the Fire,” my personal favorite, is also the name of their album, which is currently available.

At the beginning of the set, two band members literally kicked off their shoes to play. Their set began with what sounded like being in an enchanted forest and went on to include every instrument from a cello, a banjo and unconventional guitar picking. The band – made up of Dalton, Stefan Banjevic, Will Whitwham, Scott Bouwmeester and Sean Lancaric – hails from Toronto, Canada. They will be making their way up the West Coast through the rest of this month and will be off to Europe in the fall, touring in support of When You Left the Fire.