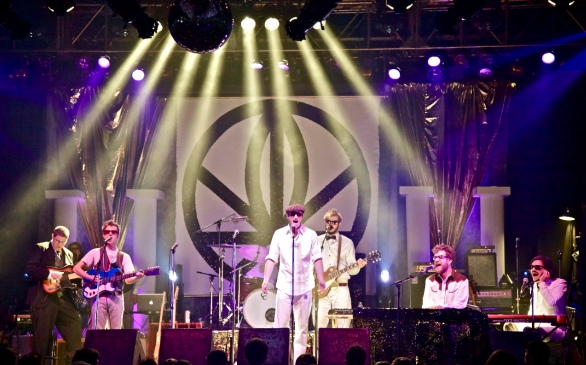 Every now and then a band comes along that surprises, delights, insults and altogether makes people sit up and notice. Mainstream or not Gayngs has more or less filled the shoes of all of the aforementioned adjectives. Some love them, some hate them and most are just wondering where the “Y” in the name came from and why the music makes them want to have intercourse.

Self-proclaimed band “wrangler” Ryan Olson is similarly perplexed with his band’s success. Their debut full length, Relayted, was recorded with no less than 24 members, a feat more akin to a movie producer than a musician whose main musical aspirations are expressed through his main project, Marijuana Deathsquads. Most notable among members is Justin Vernon of Bon Iver.

Gayngs’ sound straddles the boundary between self referential and outrageous; low key and highly strange. Recorded entirely at 69 BPM, Relayted is an amalgamation of guitars, keyboards, drums, saxophones and sexy vocals. The low-key nature of the music takes some getting used to as the entire album sounds as if it is filtered through a Nyquil and Kenny G cocktail.

The self referential, ironic nature of Gayngs has pleased and pissed off people left and right. Fresh off an East Coast tour and appearances at Coachella, Olson comments, “Some people just hated us. The very ironic nature of the sound brought out hipster haters from all around.”

To their defense, it’s hard not to apply the term for a soft rock throwback band, comprised entirely of long haired, neon wayfarer-wearing musicians. However, there is something wildly refreshing about Gayngs.

Olson says the band’s unique sound was inspired almost entirely from a local radio station that specialized in nothing but cheesy soft rock: “We wanted each track to meld into each other with the tempo we set with the first track ‘Gaudy (Side of Town).’” As one might imagine, the recording process for such an ordeal was nothing short of a chore.

“When you have that many members you can’t just record like normal. We had people just stopping over at my house to record whenever they could. We also recorded in Justin [Vernon]’s studio whenever possible. “

Naturally, the live show is a bit less of a cluster.

“We normally have around nine to 12 members live. There are a lot of other bands happening within Gayngs. I don’t want to stop the other bands from existing.”

Like the band’s unorthodox sound, Gayngs’ first live show ever was equally as strange. All 24 recording members were present for an event Olson describes as “The Last Prom on Earth … a post-apocalyptic event with mosh pits full of make out sessions.” The buzz behind the event even brought a special guest.

“Prince definitely showed up. He existed. It was pretty wild having a guest like that for our first show,” Olson notes. It became immediate that this was more of an impassioned, strange side project for all parties involved.

“We’ve played five- or 10-stop tours on either coast and a bunch at South By South West as well as Coachella. But this is a side project. Sunset Junction will be our last hurray, our last show.”

That’s right. Aug. 28 is planned to be Gayngs’ last show as a band. Anyone antsy to get in on one of the band’s trademark make out mosh pits will have to drag themselves out to the Sunset Junction Street Fair, which features one seriously diverse lineup. Hanson, Butthole Surfers, Bobby Womack, Lil Jon and … yeah, you get the picture. Music fans from all walks of life will get a taste of everything at the two-day festival. Whether or not they’ll enjoy the eccentric lineup is yet to be seen.

“We certainly didn’t see any of this coming. I think we’re all ready to get back to our own bands,” notes Olson.