Natalia Kills: Channels her Dark Side with Perfectionist 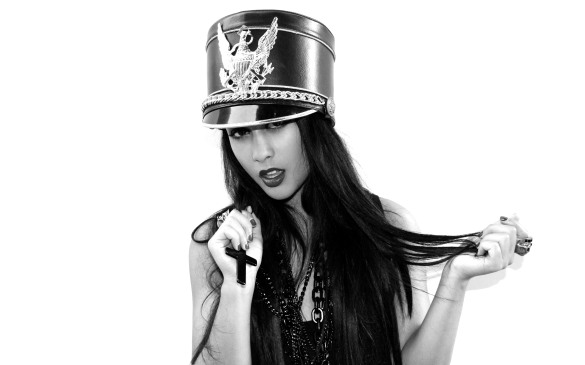 When a lady croons about making love to zombies, you know listeners are bound to hunt her down and find out whom this strange siren is. In a music industry dominated by blonde European exports, British-Jamaican singer Natalia Kills demands your attention.

The 24-year-old femme fatale, who’s rarely spotted without heart-stopping pumps, a blood-red pout and floor-caressing cloaks shielding her flawless caramel skin, doesn’t want to be a flavor of the week. Rather, she’s launching a new genre, dark pop, an homage to her rugged Bradford upbringing in England. Yet it’s this same place that would serve as fuel to music-hungry Kills, who as a child, wanted to join “a bad bitch girl gang.”

“Bradford is an odd place,” describes Kills while touring with 28-year-old Swedish chart topper Robyn. “It’s mostly famous for serial killers and factories. There are bodies buried all over the moors. Growing up there was interesting in the sense that it’s so vacuous and bland. You have nothing but freedom. With that is the fear of being kidnapped and never seen again. I suppose it made me a thrill seeker. I don’t look for trouble, but I’m not afraid of the dark.”

At age 13, a time before any of Kills’ classmates even considered college, she was chosen to join the National Youth Theatre, which would eventually lead to a choice that, to this day, she has no regrets in making. Just a year later, then 14-year-old Kills would leave behind a city of riots and tension to find salvation on the streets of London. While she learned the ins and outs of television sitcoms and filmmaking, she wasn’t satisfied with being an actress.

“I always knew I had to be creative,” explains Kills. “[But] I wanted to be myself. I wanted to be a creator, not just someone who expresses some writer’s creation.”

Kills would then begin a new project, one that would ultimately pave the way for a starring role in a new career.

After four years on BBC television, Kills found a way to ease her creative itch by uniting her filmmaking background and desire to sing. Rather than make the usual demo and mail it out to countless record labels, she produced and directed a Web series, titled “Love, Kills xx,” where she unveiled her seductive goth pop with a hint of hip-hop.

For the first time, audiences were exposed to “Zombie,” a horror dance anthem that shows Kills marching on cold, dark streets in spiked stilettos and a midnight black gown, a modern-day bride of Frankenstein, only with a more alluring Bettie Page ’do. While many of today’s artists are fighting to keep their private lives a secret, Kills relishes in the exposure of being discovered on the Internet.

Kills’ intent may have been to unveil an “invitation to her imagination,” as she insists, but she also proved to listeners and critics alike that artists could indeed have more control of their art online.

“I think the Internet is great,” explains Kills. “It’s information without speculation. It allows you to be as mysterious or intimate as you choose. If you want to connect with your fans, you can upload a blog or photo in seconds, and the world can feel closer and more in love with you. If you don’t want to tweet for two weeks you don’t have to. Sometimes it’s best to leave them wondering.”

There was no doubt that the Bradford native was ready for her close-up. “Love, Kills xx” not only became an Internet sensation, but its sinister dance melodies are what made will.i.am of the Black Eyed Peas want to instantly sign Kills in 2008. After moving to Los Angeles and collaborating with several producers who have all worked with artists ranging from Snoop Dogg to Lady Gaga, Kills finally completed her debut album, Perfectionist, in 2010. That same year, the songstress of leather and lace became the It-girl of New York Fashion Week, all while being crowned as Robyn’s partner in crime during her tour. And even though Kills is signed to Cherrytree Records, she’s no Gaga carbon copy. Rather, Kills is dead set on proving to critics that there’s more to women in pop than couture and theatrics made fit for Page Six.

With Perfectionist having just been released, she ultimately hopes that listeners will finally hear what she’s been wanting to say since leaving behind Bradford.

“My album is a celebration of all the feelings we’re not supposed to have,” says Kills. “I want to dance through the ‘fuck him he didn’t deserve me anyway’ moments and sing along to ‘I’m in trouble and I don’t know how I’m going to pay my rent’ times. Perfectionist is about desire – wanting everything and having nothing.”