Whole Notes, Half Notes and more. 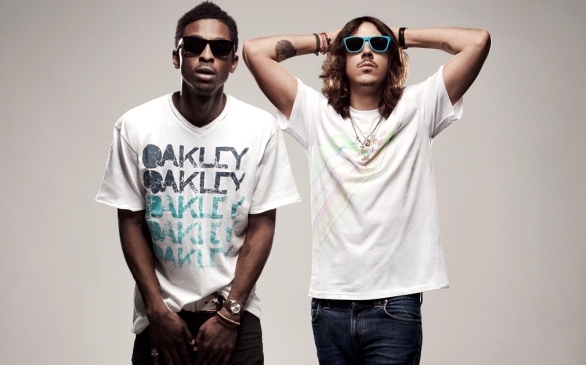 Get ready for the new Shwayze & Cisco Adler album, Island in the Sun.

Island in the Sun is the name of the forthcoming new release from Shwayze & Cisco Adler, and you’ll be able to get a hold of it in just a couple weeks. But the duo has already loosed a couple of teasers including the single “Drunk Off Your Love” featuring Sky Blu of LMFAO and a video of “You Could Be My Girl.”

“It’s California to the max – hot chicks and cool brews,” says Cisco of the video. “It’s a day in the life as we return to Malibu and hit the beach to get the word out. It’s just us being us. The video was shot by Talkboy TV, and they did an amazing job creating the perfect visual for this beach party jam.”

Island in the Sun drops on Sept. 13 on Adler’s own Bananabeat Records and Shwayze & Cisco will perform live on Sept. 17 at Verizon Amphitheatre in Irvine; that’s the last stop for the Seedless Summer 2011 Tour, also featuring Slightly Stoopid and Rebelution.

Kind of Like Records is celebrating the fact that they’ve put out five vinyl and CD releases since they opened their doors last year, having recently hit that mark with the Domesplitter album from party-punk band Direct Hit! The celebration includes the release of a free sampler, Kind of Like a Sampler 2011, featuring cuts from Mixtapes, Direct Hit!, Timeshares, Candy Hearts and Masked Intruder. All you have to do to get your copy is “like” the label on their Facebook page.

Denver-based modern rocker Aldo Leopardi has just released a new EP called Villains & Heroes, and label Backslash Records is having a contest that offers creative fans a chance to win one of two iPad2s. To enter, contestants create a music video for the song “My Parade” and then upload it to YouTube, with a link to the video posted at facebook.com/aldoleopardimusic.

Leopardi and his band will pick a Grand Prize winner from the top five most-viewed entries and a second Grand Prize winner will be selected based on originality and creativity. Clips from the best entries will also be used to create the official video for “My Parade.” Entries must be in by Oct. 16.

Putumayo World Music has announced the first two releases in their new Putumayo World Beat series wherein world music is blended with contemporary styles such as hip-hop, soul, electronica and more. For African Beat, African beats and western rhythms are fused by groups like Vieux Farka Toure of Mali, 9Ice from Nigeria, Lex Sen from Senegal and Busi Mhlongo from South Africa. Latin Beat features upbeat grooves performed by rising Latin pop, R&B and salsa stars like Colombia’s Profetas, Ecuador’s Sarazino and Cuba’s Moneda Dura whose contribution, “Goza,” features the late Ibrahim Ferrer. Putumayo releases will continue to be available on CD, but when these two 11-cut compilations drop on Aug. 30 the label’s music will become available through digital retailers for the first time.

Fans of the late Ronnie James Dio are in for a treat this week; Eagle Rock Entertainment has just reissued Rainbow’s Live in Germany 1976 album. The two-CD set features Dio singing eight tunes including the classic “Man on the Silver Mountain.”