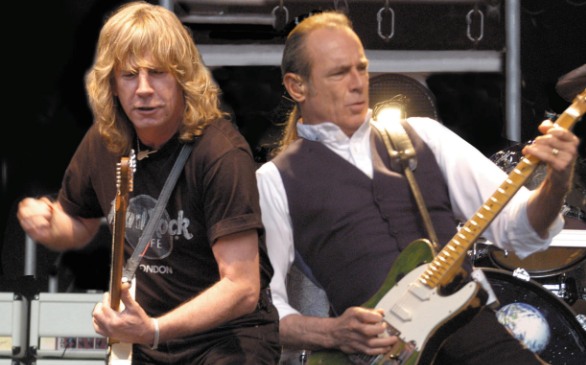 One of the hits of the late-’60s psychedelic era that radio loves to play over and over is “Pictures of Matchstick Men,” the only song that British band Status Quo has ever managed to break in America. The band plays the trippy sing-along about midway through this show that was recorded in Switzerland in 2009, but Status Quo moved along from the psych sound a long time ago, opening with their own rhythmic, guitar happy rocker “Caroline” before launching into a cover of Dion’s “The Wanderer” and then back to their own material for guitarist Rick Parfitt’s blues-rocker “Rain.” Status Quo has survived this long (they’re still active today) not only because of superior musicianship but also because they are not afraid to change styles; “Don’t Drive My Car” leans towards disco-era rhythm and blues, “The Oriental” buzzes like Texas blues filtered through Chuck Berry and “Mean Girl” features a Rockpile-style rockabilly beat.

It’s a little odd then that the band has failed to gain much of a following in the states since most of their music has an American genesis. But bless ’em anyway; Status Quo is gonna keep rockin’ and those lucky enough to have already climbed on board will dig this seventeen song concert performance.