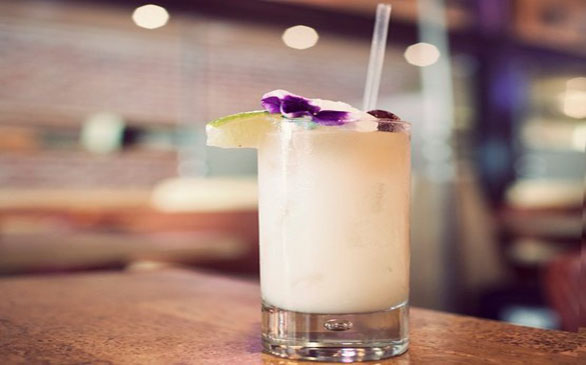 I have to admit I have been anxiously awaiting the opening of this week’s On the Menu restaurant, Mohawk Bend, for some time now. The fact that it is less than a mile from my place means I’ve had to patiently watch the progress from “under construction” to “grand opening.” Well, a little over a year in the making, Mohawk Bend has opened, and I’m glad to say, it was worth the wait.

Mohawk Bend (located on the place where Sunset Boulevard “bends” to meet Mohawk Road, get it?) was built in a former one-off movie theater, and the owners wisely retained the marquee out front, which gives the impression of attending a movie premiere in the 1930s.

The interior space is beautiful with a bar (featuring 70 beers on tap!) running along the right side. We were seated in the back section, which gives the illusion of being outdoors but actually isn’t. Large glass windows separate you from the front, and exposed brick replaces finished walls. The ceiling rises to an A-frame, huge potted trees are placed strategically and the lights are dimmed to create a cozy environment even though the room is fairly large.

Before food, there must be drinks, of course. As I mentioned there are 70 beers on tap, all sourced from the United States of California. That’s right, no imports here, not even with the liquors (sorry Jack and coke, fans.) A key word at Mohawk is “local,” not just with the food but with the spirits as well. We decided on two specialty drinks, the Mildred Pierce (a fruity gin concoction) and the Fire Station 20 (a rum, lime and soda libation). Not only were the drinks delicious, but they serve for good causes as well. For example, for every Mildred Pierce ordered, a group called Greenbar Collective plants a tree in South America. For every Fire Station 20 ordered, $1 goes to a local firefighters organization. Who said drinking isn’t good for you?

Later we ordered the Absinthe Spritzer, this was the drink winner of the night. Refreshing and strong, it is served with a black licorice stick, which you could use as a straw – a nice touch of whimsy for a potent drink.

The food menu is still evolving and changes daily. We ordered three of the five starters to get us going. Two were outstanding. First, the Eggplant Rolls: thin slices of eggplant rolled with Serrano ham, smoked mozzarella and basil. The first bite was an explosion of flavor, with the smokiness of the cheese blending perfectly with the saltiness of the ham.

The other hit was the Spanish Stuffed Dates: dates, stuffed with chorizo and wrapped in bacon. I mean, need I say more? It’s a sweet, spicy, salty ball of love.

Not so inspiring was the Cazuela, a shrimp and Bilbao chorizo ragu on soft cheese and corn polenta. I thought this would be the clear winner, but while it was good, it lacked the “wow” factor I was expecting.

The remainder of the menu is divided into mainly salads, three seafood options, “pub grub” and flatbread/pizzas. So while the look of the restaurant is upscale, the menu is kept approachable, no item is priced over $15.

There are a lot of vegan options and we noshed on the kale salad, served with garlic and chili with balsamic vinaigrette. We ordered the Pig Newton pizza, featuring locally cured Serrano Ham, goat cheese, fig and rosemary tapenade. The pizzas are thin crust and use only California ingredients (naturally.) My preference is a wood-burning oven, but the pizza was very good and a perfect size for sharing.

We also ordered the Carlsbad Mussels, steamed to perfection with a light curry and cream sauce – with extra bread for dipping, of course.

The dessert options are limited, but I would suggest having a scoop of gelato, sourced from Pazzo Gelato, just down the street.

Also, there is a “secret dessert” that is not on the menu. Tell them you read this article, and you will be one of the select few to partake!

Mohawk Bend is a fun, lively place, with great food and an amazing beer selection, and is a welcome addition to this reporter’s neighborhood.