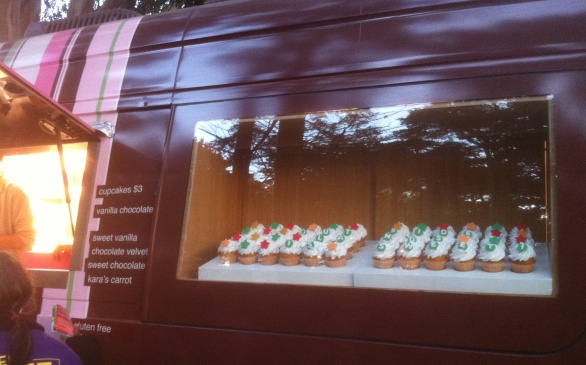 Even though we’re in the midst of one of the world’s worst economic crises, the rise of gourmet-food lovers is rampant. It seems like a new food blog or food photo site sprouts up on the Web every day, chefs and food critics are huge celebrities and organic/specialty food shops are abundant. It’s no wonder that the state of food offerings at summer music festivals has vastly improved. Nowhere is this more apparent than Outside Lands, since it calls one of the country’s foremost culinary leaders, San Francisco, home.

Not only is Outside Lands a huge rock concert, it’s an annual gathering of some of the best local restaurants, bakeries and food trucks that the city has to offer in the Taste of the Bay Area. Rows of food tents lined the area around the Lands End main stage and Panhandle Stage, and a mega food metropolis took up McLaren Pass, which was divided into a food truck forest, Choco Lands (desserts) and the Mission (Mexican cuisine). There was also a Wine Lands area, just for tastings. Even if you had a whole month, you wouldn’t be able to sample it all.

Some of the highlights were:

Salumeria by Flour + Water’s Roasted Porchetta Sandwich with chili, caramelized onions and arugula was really good. It had just the right amount of spice.

The Santa Rita Cabernet Sauvignon was amazing; one of the best I have ever had.

Even though I was already quite full when I started on Pica Pica Maize Kitchen’s Maize’wich Pabellon (shredded skirt steak, sweet plantains, black beans and cheese), I still finished the whole thing. This was easily the most memorable dish I ate all night.

A popular snack for many festivalgoers was Q Restaurant’s Tater Tots with Blue Cheese Dressing and Bacon Bits. A lot also went with the quick, cheap option of a slice of pizza from Spicy Pie. Mission Minis’ Hazelnut Chocolate Mini Cupcakes were a great way to cap off the night.