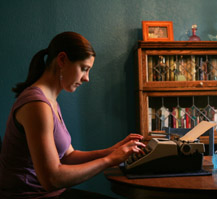 In a culture focused on the smallest, quietest, quickest gadgets, the trusty manual typewriter is attracting an unlikely new fan club – 20- and 30-somethings who feel stifled by modern technology.

Once doomed for dusty basements, the old manuals are ending up in the hands of people like Mariah Pospisil, 22, who pecks away on her 1960s Olympia in coffee shops or her back yard while her computer sits idle at home.

Sure, they practically grew up with Powerbooks and Palm Pilots, but some young adults find those sleek technologies unsatisfying when it’s time to channel their inner novelist or correspondent. A typewriter – hammers smacking the page, bells dinging at the end of each line – feels more intimate than a blank screen and a blinking cursor, they say.

"It just seems like the computer and printer are too much of an intermediary between me and my writings," said Pospisil, of Los Altos, Calif.

It’s tough to tell how many young people are buying typewriters. Some pick up restored Remingtons and Royals in retail shops, but others find them in flea markets, at yard sales, on eBay or discarded on the street. Still, several Bay Area stores said they’ve seen a recent shift to younger customers, overtaking their traditional clientele of collectors and older folks who were never comfortable with computers. More than two-thirds of customers for typewriters and ribbons at California Typewriter Co. in Berkeley are in their 20s and 30s, employee Carmen Permillion said.

"They’re the writers, the artists," said Permillion, whose father has owned the store since 1981.

Popular wisdom would hold that typewriters are a dying breed, replaced by ever-faster personal computers that do far more than type text. Retailers that once specialized in typewriters have dropped the word from their names, and only one company – Italy’s Olivetti – still makes manuals. Some shop owners lamented that the relics are all but gone.

Not so, said Peggy Tidwell, whose family has owned Los Altos Typewriter since 1967. While she hasn’t seen sales grow in the past five years, recent college graduates and others younger than 30 have bought most of the store’s refurbished typewriters.

"They have no feeling about their computer, but they like their charming little typewriter," Tidwell said. "It’s got character, and it’s more alive than a computer is."

For a generation raised with technologies that can be outdated within months, there’s something impressively permanent about a typewriter. And for those used to computers that operate often mysteriously and practically in silence, it’s refreshing to use a machine with visible working parts. It’s similar to teens and 20-somethings choosing the hiss and pop of vinyl records over the clarity of mp3s, said Robert Thompson, a Syracuse University professor and popular culture expert.

"A lot of young people who only experienced in their early youth these types of digital, totally electronic experiences find the tactile, analog stuff very appealing," said Thompson, noting that a couple of his students have submitted typed papers. Young people who choose typewriters "are very careful about what they do" when they write, he said. "It doesn’t seem as disposable and casual."

Some retailers are tapping into that market. Blue Moon Camera and Machine, a Portland-based shop that sells refurbished typewriters and film cameras, opened three years ago and promotes its products with the slogan "the cure for modern machine angst resides within." An online gallery features photos of young models in retro dress holding shiny red, blue and green typewriters.

"The computer’s going to have to be swapped out every two years," Blue Moon owner Jake Shivery said. "The typewriter’s more of a companion piece. It stays with you forever."