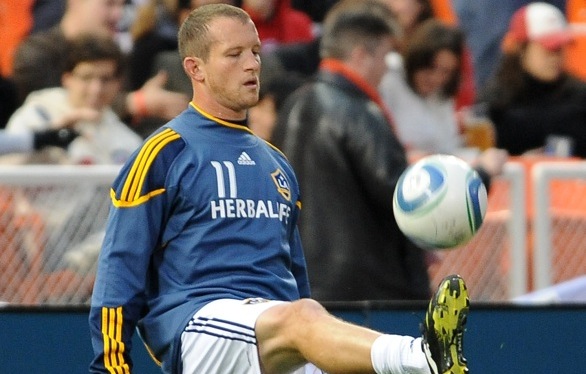 Galaxy forward Chad Barrett
(Credit: Chuck Myers/MCT)
After winning their opening game of CONCACAF Champions League play over Motagua, the Galaxy continued their dominance with a 2-0 victory over visiting Alajuelense at the Home Depot Center Aug. 25.

“I think we played well tonight. Not an easy game, a good opponent, different kind of game probably than we are used to,” Galaxy head coach Bruce Arena says. “…I think overall we are real pleased with the win. This is going to be a tough competition until the end.”

Only about 10,000 fans attended the match, but the Galaxy now have six points in group play of the international competition that features teams from the United States, Costa Rica, Guatemala, Honduras and Mexico, among others. Los Angeles is 2-0-0 in Group A. “It was important that we won tonight. We said it at the start of our group: We need to win our home games. Tonight was a tough game,” midfielder David Beckham states.

Just before the first half ended, defender Omar Gonzalez netted his first score of the tournament in the 38th minute. Beckham was credited with his second assist after Gonzalez penetrated the back of the net on a head off a corner kick.

Striker Chad Barrett sealed the win for hosts at 77th minute mark, when he tapped in a cross from defender Sean Franklin. Six minutes prior to scoring, Barrett stepped onto the field for the first time in a Galaxy uniform. Franklin received the assist.

The Galaxy will now have some time to rest their bodies until their next match, especially after winning their first two home games of the CONCACAF Champions League.

“We made the plays we needed to win the game and at the end of all of it we have six points from our first two homes games, which we wanted, and we got a little time to rest. It’s a perfect night for us,” comments midfielder Landon Donovan.