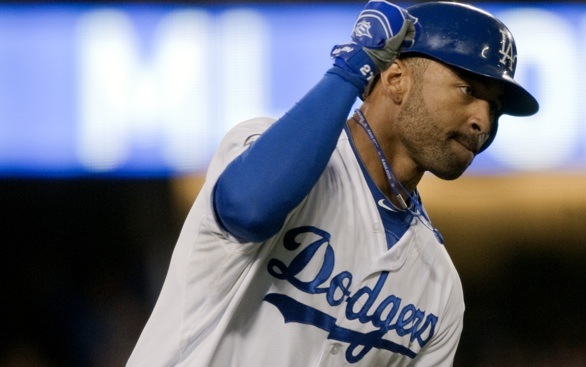 Matt Kemp garnered his third game-winning homerun of the season on Saturday.
(Credit: Gina Ferazzi/Los Angeles Times/MCT)
Under the pitiless sun of late August last weekend the Dodgers made what appeared to be a final stand for contention in the pennant race. Facing the Colorado Rockies, rivals for third place in the National League West, the Dodgers took two out of three games in a surprisingly exciting series for a couple of teams whose chances for postseason play are slim to none.

In the first two games the Dodgers mounted impressive comebacks, each within the bottom sixth inning and each had bizarre instances. On Friday’s game the Rockies’ pitcher, Esmil Rogers, was throwing a gem before the bases were loaded in the sixth with two outs. Aaron Miles (aka “the Little Guy”) faked trying to steal home just well enough to force a balk. It was downhill from there as the Dodgers pummeled the Rockies for an additional five runs in the inning, all they would need to win that day by a score of 6-1.

Saturday’s game offered more dramatics as the Dodgers – down by four going into the sixth inning – rallied for five runs. The lead was short lived, however, as the Rockies came back with two atop the seventh. It wasn’t until the bottom of the ninth that the Dodgers would tie with James Loney’s homerun to send the game into extras. Matt Kemp would go on to put the exclamation point on the 7-6 win with his 11th-inning walk-off homer, his third game-winning homerun of the season.

After winning their fifth in a row Saturday in such dramatic fashion, imaginations were fired up and “what ifs” were entertained. What if the Dodgers went on to win all of their remaining games? They would end the year with 93 wins, very likely enough to make the playoffs, if not win the division. Of course, it has never been done in baseball history. But who knows, maybe this is the year?

The brief lives of the “what ifs” and “maybes” seemed to wilt under the blazing sun on Sunday as the Dodgers watched their luck run out, dropping the final game to the Rockies by a score of 7-6. The Rockies took charge early, scoring five runs in the first off of 21-year-old rookie Nathan Eovaldi. They were hits that seemed just barely out of reach of Dodger fielders. Outfielders Tony Gwynn and Trent Oeltjen lost balls by inches, and a fumbled relay play to starting pitcher Eovaldi prolonged the inning. The official scorer ruled it a hit, but a more experienced pitcher would likely have made the play. The Dodgers struggled valiantly just enough to fall short a run and bring the team tumbling back to reality.

Faced with the prospect of playing “meaningless” games in September, the old existential questions arise once more. Just what is the meaning and purpose of Dodger baseball in Los Angeles in an age of franchise bankruptcy? Ah, but before we descend bitterly in despair there is good news to report. Both Dodger Hall of Fame announcers Vin Scully and Jaime Jarrin announced this weekend that they will be returning next year to call the games. The announcements are a reprieve against the depressing sensation that all the spirit and soul of the organization is being drained out. For over half a century, Angelenos have been blessed by their cool and articulate voices. They share a reverence and enthusiasm for the game and have helped give the Dodger organization a classiness that once defined the franchise. So at least for another year the old Dodger fans, English and Spanish speaking alike, can continue to get their fix.

The big question, however, is if the Dodgers will field a team worthy of contention. On that score, there is little to be hopeful about as the mounting debts of owner Frank McCourt pile ever higher. With the decline of ticket and concession sales, the latest estimates put the loss of revenue as high as 30 million. The Dodgers will need more than just financial capital; they need a boost in morale. In the meantime, the precious days of September dwindle down. Heck, at least we got Vinnie!