Identity Festival: Stops off in L.A. with the Crystal Method 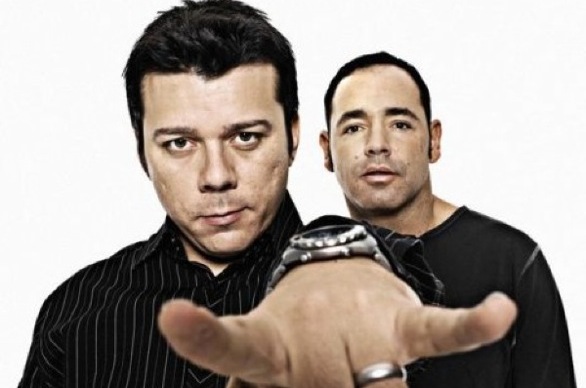 The Crystal Method perform at the inaugural Identity Sept. 4 at the Palladium.
When details of the first Identity Festival were announced in early May, electronic music fans in Los Angeles quickly circled Sept. 4 on their calendars. As one of 20 cities on the festival’s nationwide tour this summer, Los Angeles would be welcoming some of the world’s best DJs to play on the same stage for one night.

What fans didn’t know, though, was how difficult it would be for festival promoters to find a venue in Southern California to host the event. Originally slated to take place in Orange County, the festival’s first venue wasn’t anywhere near the OC when it was finally revealed in July.

The festival, rather, had migrated much further east, where promoters set their eyes on San Manuel Amphitheater in Devore. The news caused an uproar from many fans, who openly voiced their disapproval for the venue choice and the festival lineup on Identity’s Facebook page.

And a month later, the promoters listened. Late last week, a new venue was announced for Identity Festival – one that actually was within L.A. county lines.

“It’s all about expressing how you feel, your personality,” Arno Kammermeier says when it comes to the music he creates with Walter Merziger in Booka Shade. “Anybody can produce a nice, functional club track, but to produce something personal – music that is the essence of who you are – that is much more difficult.”

While a star-studded lineup hits the main stage, Identity Festival’s two other stages shouldn’t disappoint either with sets from Steve Aoki, the Crystal Method, White Shadow, Doorly and LA Riots. Campus Circle spoke with Ken Jordan, who partners with Scott Kirkland in the Crystal Method, to get his thoughts on how the Identity Festival has gone so far and what we can expect at this year’s L.A. show.

Why did you guys sign on to play the first-ever Identity Festival this summer?

We thought it was a very ambitious, cool tour. We liked the fact that it was all electronic artists and it was traveling to a lot of cities that don’t normally get big electronic shows. We’re familiar with doing these kind of tours since 1996 and thought it would be a great thing to be a part of the first one.

As an act that started out in L.A., what will playing there at a nationwide event such as Identity Festival be like?

It will be great. L.A. is where we have lived for the last 20 years. We both grew up in Las Vegas, and the day after L.A. we’ll be playing Vegas, which will be fun too. The Palladium is a great venue. We can’t wait to see all of our friends in Hollywood.

The venue for the L.A. date was recently changed from San Manuel Amphitheater to the Palladium. What do you think of the switch? Do you have any fond memories from past shows at the Palladium?

Yeah. The second video we did, for “Busy Child,” included a little bit of footage from a Palladium show. It was a sold-out show, and that was a great memory because we had the Propellerheads and Fat Boy Slim on the bill. I think it’s great it moved because it’s more of an L.A. show. San Bernardino is more of an Inland Empire show. It’s nice that it’s actually in L.A. now.

How has the Identity Festival tour gone so far and what has surprised you the most about it? What have been some of the highlights?

We’re really happy with the crowds. The stage we’re playing on, the Dim Mak stage, has amazing sound. We have a great visual guy with us. But I think what’s surprised me is how big dubstep is. People love dubstep everywhere.

Because dubstep is so popular now among electronic music fans, do you guys feel like you have to adapt to that at all?

We never really react that way to a new sound, but dubstep is very at home with us. Our early stuff was always one side as a faster tempo and the other side as a hip-hop tempo. We’re very comfortable living in the dubstep world. We’ve had some dubstep remixes of our tracks done already, and there probably will be some dubstep influences on future stuff. But we’re not going to turn into a dubstep act.

You guys have been together for almost 20 years now. What’s it like playing at an event with much younger acts such as Pretty Lights and Skrillex who have only been around for a few years?

We’re used to it. We’re always playing different venues with young acts. The music we make generally caters to a younger audience, although we usually have two or three generations of fans at our shows now (laughs). But that doesn’t bother us, and it’s really cool actually.

Did you and Scott ever imagine that you’d be making music together for this long?

When we first started out, we just didn’t know that we would have the success that we’ve had. This is our passion, so we planned on making music for our careers and we still plan on making music for a long time. I don’t know if we’ll be playing 10 years from now, but hopefully we are.

Before hitting the road for this year’s Identity Festival, did you guys feel like you had to take a certain approach that you hadn’t done on previous tours?

The one thing we wanted to do that was different was the contraption we’re playing. We took a CDJ-2000 that we got from Pioneer, and they asked us as well as a few different artists to turn it into an art project. It was going to be a traveling exhibit, and then the individual pieces we’re going to be auctioned off for charity. So we’ve created this thing that has our album artwork, a mini keyboard and two bass guitar necks on it. At first it was just an art piece, but Pioneer liked it so much they asked us to make some working versions. And that’s what we’re playing on this tour. It’s pretty fun to watch.

What are your guys’ plans for after Identity Festival?

What we have to do immediately after the tour is finish this other project that we’re working on. It’s a film project with the Grammys and IFC called Regeneration. It’s where five electronic artists get to work with different genres of music, and we got R&B and soul. We got a chance to work with Martha Reeves and (her band) Martha and the Vandellas. We went to Detroit and recorded with some other legendary Motown musicians. So right when we get back, we’ve got to finish producing that track. Then, after that, we got two songs in two different scenes in this movie called Real Steel, which will be out in the fall. And we’re always working on our next album.

Identity Festival is Sept. 4 at the Palladium. For more information, visit idfestival.com.