Shark Night 3D: A Lesson in the Three Bs: Bikinis, Babes and Bloodshed 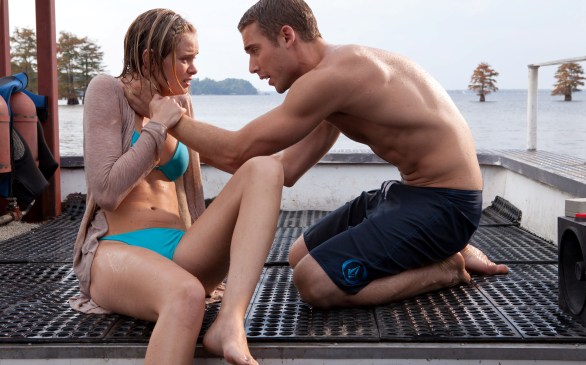 “No sharks were harmed during the making of this film.”

So says Sara Paxton, one of the scantily clad stars in Shark Night 3D who sat down with me for a chat at the W Hotel in Westwood.

“All animal lovers can be happy about that,” pipes in former “90210”-er Dustin Milligan, Paxton’s co-star in the bikinis-babes-and-blood fest. In fact, no live sharks were used at all (oh, the wonders of animatronics and CGI!).

Taking itself a little more seriously than that other 3D creature features about attractive coeds being eaten alive by underwater critters (cough, Piranha, cough), Shark Night’s scares are a little more grounded in reality and avoids completely settling down in Campy Town. The plot sounds like something out of a slasher flick – sans a masked killer: A group of college friends shack up at an island house on a lake. They take off their clothes. And a death count begins (turns out someone’s released several finned predators on the unsuspecting bunch, and a race for survival starts).

While shooting the film down in Shreveport, La., the cast – which also includes “American Idol” alum Katharine McPhee, Chris Carmack (The O.C.”), Joel David Moore (Avatar), Chris Zylka (Piranha 3DD), Sinqua Walls (“The Secret Life of the American Teenager”) and Alyssa Diaz (“The Nine Lives of Chloe King”) – discovered all kinds of southern comfort and hospitality, whether it was hitting up some music festivals, enjoying the casinos or sampling the local cuisine. Karaoke especially provided a welcome opportunity for the costars to bond with one other.

“Kat McPhee was hands down the best,” Milligan remembers, “because she can obviously belt out those tunes.” Carmack also recalls what went down during that musical night: “Kat McPhee obviously took the gold medal on that one. The cooks were running out of the kitchen to come hear her sing. No kidding. They came out, spatulas in hand.”

But not all was fun and play during filming. Before anyone could dive into the local nightlife, most of the cast had to be trained by Navy SEALS in water tanks and learn how to breathe underwater during their first day on set. It wasn’t for the claustrophobic.

“You have to be completely Zen when you’re down there,” Paxton explains.

A week’s worth of training in a pool turned into a mini scuba class, and the water did a number on everyone’s eyes during the multiple takes they had to capture.

“By the end of the day, we all went temporarily blind,” Paxton says. “I was like, ‘My eyes are falling out of my head!’”

“It’s almost an injustice to call it lake water,” Moore clarifies. “It’s really just mud that happens to settle … Loose mud is a better version of it.”

The cast member with the most difficult challenge to overcome was Diaz, who has a fear of sharks.

“When I was filming, to see these sharks, when you’re in open water and you’re vulnerable and you see that fin, you don’t have to act. It’s just terrifying,” she explains. “And sharing the waters with real-life 14-foot alligators didn’t help. They called cut, and I was like, ‘Get me out! Get me out!’”

For Zylka, the most difficult part was when the acting became an afterthought: “When something’s exploding or a shark is after you, or when you’re on a jet ski, you have to really focus and maintain that you’re trying to create something.”

And then there’s that issue of being in swimsuits for most of the movie.

Carmack nods. “Ever see Dustin Milligan in 3D? That’s a lot of sexy.”

The requisite workouts and diets were a no-brainer, and the fried foods of Shreveport didn’t make their regimens any easier.

“We’re constantly at the gym working out. You had to,” Diaz shrugs. “In Louisiana, when they’re giving you Chik-Fil-A, what are you gonna do?”

“I really appreciated those ladies!” he smiles, savoring the healthy options that were served to cast and crew every day on set. But the movie isn’t just about the display of toned body parts, bitten off or not.

“For a movie being about sharks in a lake, it was a very well-written script,” Moore says. “As an actor, you want to make sure you have something that you’re working with; it’s not just cheesy dialogue the entire time.”

Just like the sharks themselves. After being given a crash course on all the different species of shark, the cast discovered how harmless yet mysterious they can be in real life.

Is that the scent of a potential spin-off?

Interviews
Lily James and Sebastian Stan find a real relationship at the heart of 'Pam & Tommy'
344 views
Interviews
Ricky Gervais knew people would be mad about his new Netflix special. He did it anyway
933 views

Interviews
The star of Oscar-nominated 'Flee' gives his first interview: 'I wanted my story to be seen'
1,287 views

Interviews
'Crazy Rich Asians' made Henry Golding a star. Now he's showing Hollywood everything he can do
972 views
bid=||