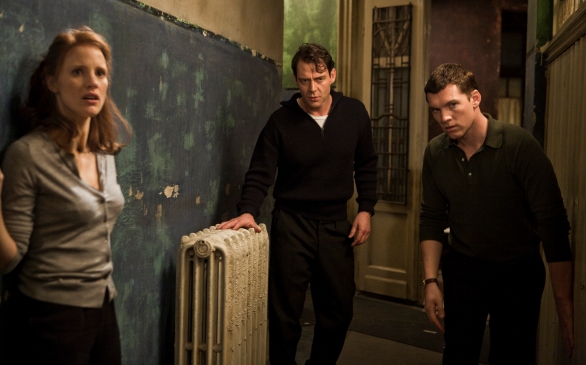 In The Debt, directed by John Madden (Shakespeare in Love, Proof), two retired Mossad agents in 1990s Israel receive news that may or may not unravel what they told to reporters – and the world – after returning from a secret mission in Germany in 1966. On this mission, the agents – Rachel, Stephan and David – were responsible for capturing an ex-Nazi doctor; and, as a result, have been celebrated by their country for 30 years. However, as we begin to learn shortly into the film, this may or may not have actually been the case.

The setup for The Debt is top-notch: It comes across as an espionage thriller from the start, laced with elements of politics, secrecy and Nazi horror. After Rachel (Helen Mirren) and Stephan (Tom Wilkinson) receive terrifying news regarding David (Ciarán Hinds), their lives begin to take an unexpected turn.

It is then that we, the audience, are transported to 1960s East Berlin, able to see what actually happened when Rachel, Stephan and David (played during this period by Jessica Chastain, Marton Csokas and Sam Worthington, respectively) attempted to track down and capture Vogel (Jesper Christensen), the self-proclaimed Surgeon of Birkenau, who went to work as an ob-gyn after the war.

The Berlin setup is slow going but interesting, as we see the three agents – all under 30 years old – learning about each other’s strengths, weaknesses and experiences. At the same time they are educating themselves about Vogel and his many crimes, which included doing experiments on children in the concentration camp during the Holocaust. When we get into the meat of what’s happening in Berlin, the film starts to jump back and forth between past and present, interlacing things that actually happened with things that were perceived to have happened.

While the film’s premise is ultimately intriguing and the cast – especially Mirren and Wilkinson – is extremely noteworthy, The Debt fails to live up to its initial promise. Granted, there are bits of excitement here and there that make the Berlin scenario exciting and intriguing. However, the film’s main downfall happens to be its lackluster characters, all of whom end up being quite forgettable by the film’s end.

The juicy subject matter of The Debt manages to propel it forward, but even this becomes soggy when the characters begin to enter into certain romantic entanglements. And while we ultimately feel bad for the situation they have landed in, it is difficult to feel real emotion for Rachel, Stephan or David, as they all come off a bit one-sided and uninteresting.

The Debt releases in theaters Aug. 31.