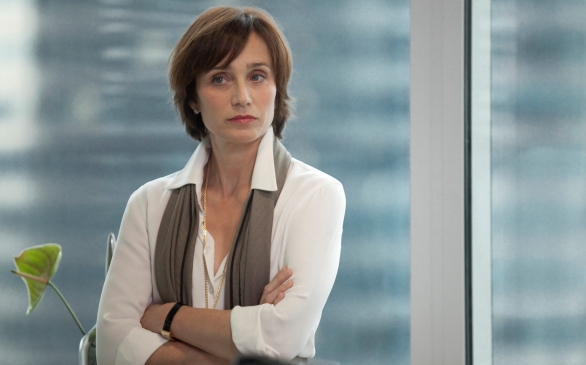 Providing a useful spin to the murder suspense genre, Love Crime brings a stylistic approach to the crime drama. It’s a combination of two films rolled into one, and the performances are utterly incredible. It’s reminiscent of a Hitchcockian story.

Everything seemed to be clicking on all cylinders for the Alain Corneau (Serie Noire, Tous Les Matins du Monde) drama, which did an incredible job holding both the amazing performances and great storyline together. Corneau directed a great cat-and-mouse story that winds and turns at every direction and makes you scratch your head and wonder what is going to happen next.

In a story of two closely knit friends, ruthless executive Christine brings on friend Isabelle as her assistant, then takes delight in toying with the young woman’s innocence. But when the protégé's ideas become tempting enough for Christine to pass on as her own, she underestimates Isabelle’s ambition and cunning – and the ground is set for all out war.

Christine, played incredibly by Kristin Scott Thomas, is a chameleon in this film as the evil mentor to Isabelle played marvelously by Ludivine Sagnier. Isabelle truly steals the show as the upcoming executive who presents many ideas to Christine, who is constantly stealing and taking credit for them, giving her the opportunity to grow in the company and landing her a transfer to the company’s American offices.

Greatly upset, Isabelle knows that if she keeps sitting idly by Christine will forget her on her way to the top. As the plot thickens, Isabelle, along with her friend Daniel, gets an opportunity to work on a project and finish it before Christine. Isabelle begins to work on a plan that will make her a smash among all of the execs and further ignite war between her and Christine. Isabelle knows the only way she will come out on top is to murder her once friend and mentor. Thus, spinning a dramatic web of murder, guilt and one of the craziest plot twists since Hitchcock.

Scott Thomas is quite believable as Christine, while Sagnier’s Isabelle teeters on that fine line of the creepy, unusual girl next door. The work environment is quite unbelievable though you continue to just go along with the entertainment.

You will truly enjoy everything Love Crime has to offer, including the stylistic aspect of noir storytelling. The performances and directing of Love Crime will make you leave truly satisfied.