Iggy and the Stooges: Still Lusting for Life 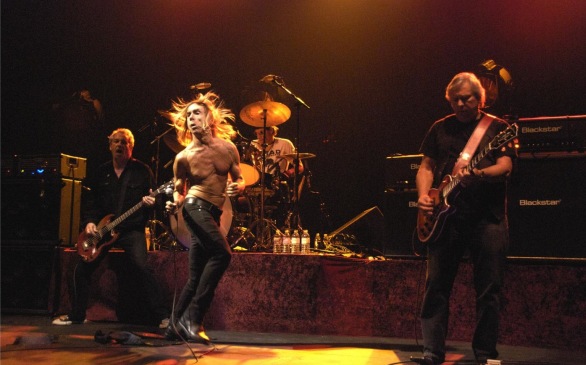 Iggy Pop loves to laugh. Sometimes it’s like hearing a mischievous child who just committed a naughty deed. Other times, he resembles a maniacal villain ready to claim victory over the world. He did plenty of it during a phone call with Campus Circle before a highly anticipated show on a Saturday afternoon overseas. The “Godfather of Punk,” as he's known by his followers, has many reasons to smile these days.

Back in 2009, his band, famously known as the Stooges, reunited with guitarist James Williamson, who joined the group for the recording of their 1973 release, Raw Power. It was a happy reunion for the band, which dissolved in 1974 and, after reforming in 2003, suffered the loss of fellow guitarist Ron Asheton, who died of a heart attack six years later. Despite the setbacks, the Stooges successfully managed to get together and garner a new generation of fans anxiously waiting to see one of the founding fathers of punk in action. For Pop, it’s business as usual.

“When I first moved in with the Stooges during the ’60s, nobody said good morning,” chuckles Pop. “They were really a gruff bunch. Everyone is a bit more polite now. Maybe everyone appreciates each other a little more, but when we’re on the road it’s like we’re living together again. Some of the big differences are: The bathrooms work, the kitchen has food and there are no creepy substances. A lot of the same stuff is there, as with any group that formed in the ’60s, like all sorts of simmering resentments, frictions and opposing points of view that make life exciting. I became strong enough to exert a little more leverage over the situation, not when I was just young and cute.”

To commemorate the Stooges’ return to music, the band mates are set to release a new DVD, Raw Power Live: In the Hands of the Fans, which captures their 2010 performance of their debut album in its entirety at All Tomorrow’s Parties in New York. Raw Power, a ferocious, violent masterpiece, is the snarling love child of teenage angst and seductive rock ’n’ roll, a parent’s worst nightmare and the salvation of small-town youth itching to be free from society’s chains.

It was the breakthrough of Michigan’s James Newell Osterberg, Jr., a shirtless wild child who would rub peanut butter and raw steaks all over his lanky figure, cut his chest open with broken glass, howl like an animal and stage dive like a man on fire jumping into the ocean. It’s no wonder audiences continue to crave Pop’s live performance of his 1973 album. Pop even admits that if he needs something stronger than coffee in the morning, playing Raw Power instantly wires him up.

“When we started, we would just go out on stage and it was like a bomb going off,” explains Pop. “People headed back to the room instinctively. We threatened them. It’s been a great pleasure to be able to go out again and play songs that were really designed to rock the house and see the house rock. That’s some of our take for doing events for people who weren’t walking around in the ’60s. You know, as in the dino word.”

It’s of no surprise that younger generations of listeners continue to discover and appreciate Raw Power, especially since today’s music is dominated by excessive technology and sickly sweet pop. Without hesitation, Pop exclaims that rock shows today have become “too boring” for his taste.

“I don’t know why it is, but no one seems to be able to move forward these days,” he admits. “Maybe it’s for a lot of reasons, but the obvious thing that comes to mind is because it’s so tempting and easy to refer to something that’s already very familiar to make a buck.”

While he does hope that artists today will eventually return to their roots and focus more on playing instruments, he believes California can pave the way for musicians yearning to be original. “California is the only place in America with a genuine culture of its own,” he says. “It really could be its own country. People do things in California because at the end of the day, it’s great to live there! Where I’m from, forget about it. You’ve got nothing to do but seethe, and your anger builds. There is a creativity gap in music that hasn’t been filled. I’m still waiting.”

Since his days of working at a record shop at age 18, Pop still has the undying energy and charisma that his idols, Mick Jagger and Jim Morrison, possessed. And while many performers from the ’60s and ’70s are long gone or have quietly disappeared from the spotlight, Pop continues marching on and making noise.

Today, he enjoys a seemingly tamer regimen of double espressos, plenty of sleep and qigong exercise. Before a performance, he does wuji breathing, a method taught to him by a tai chi master that involves 500 very deep breaths, which, he states laughing, is his “drug substitute.” Chances are, fans will never see the Stooges cashing in on reality TV fame, but they might want to cross their fingers for a new album soon.

“I’ve been writing with James, and I think he’d like to record an album,” explains Pop. “I wouldn’t mind putting out some music, but I wish there was another context. Maybe create a scary toy and when you press the button, you hear our music. I’m still looking for something.”

Raw Power Live DVD will be available Sept. 27. Iggy and the Stooges perform Sept. 7 at the Palladium. For more information, visit iggyandthestoogesmusic.com.