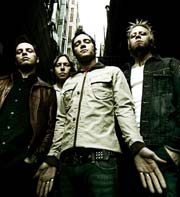 "For me, it was all about Elvis in Vegas in the ’60s and ’70s," says A. Jay Popoff, lead singer of Lit, about an era that influenced both him and the band. "Just the whole kitschy Vegas scene — and the Rat Pack. We looked at our own group of friends in a similar light, like we were our own Rat Pack, in a way. We loved to gamble like those guys did, drank like they did, and when it came down to it, we worked and played together, similar to the way they did things. We just thought they were really cool."

Best remembered for 1999’s A Place In The Sun, which spawned hits such as "My Own Worst Enemy" and "Miserable," Lit’s new, self-titled album is filled with the upbeat, rock songs that Lit is known for, such as their first single "Looks Like They Were Right." Yet songs such as "Lullaby," written by Jeremy Popoff to his young son Jake, show a more sensitive side. With A. Jay also being father to his young daughter Presley, the song takes on a special meaning for both Popoff brothers.

"The song is about not always being able to be around," says A. Jay, who thinks about life on the road without Presley. "I can’t imagine being away from her for a long period of time. [Although touring] is in the best interest of your family, it doesn’t make you miss them any less."

Fatherhood has taken a strong hold of the singer, whose 1-year-old daughter (born on Popoff’s birthday) already has a special ear for her dad’s voice. "She’s a big fan and knows my voice, and any time one of our songs is on, she says, ‘Daddy’s song!’ She sings along, which is very impressive. The only other songs she sings along with are The Wiggles and Elmo."

An unexpected highlight on the album is Lit’s remake of a popular song by The Cure. Yet Popoff admits he wasn’t too stoked about the idea at first. "I think I was the only one in the band that didn’t want to do ‘Pictures of You.’ I think it’s a great song and I loved it when it came out, I just didn’t necessarily think it would make a very good Lit song."

But after working with the song and hearing the finished product, Popoff had a change of heart. "I’m really happy with how it sounds, because it’s got a little bit of our own juice on it, you know?"

Beyond music, Lit has other ventures to look forward to. The band will soon open The Slide Bar, a rock ’n’ roll-themed restaurant in their hometown. Close to both Cal State Fullerton and Fullerton College, students will find the restaurant — which boasts an indoor and outdoor bar, TV screens and, of course, plenty of music — a cool hangout.

"We wanted a place where we could hang out, eat and drink for free, and call our own," says Popoff with a smile. "We have friends that are in bands that come to town, and there will be a stage, so on any given night they can jump up and jam." Popoff adds, "It’s almost done being built and it looks badass."

And be sure to expect the Elvis tunes blaring loud and proud on their jukebox.

Lit’s self-titled album is currently available. Lit will be performing with Hoobastank July 13 at the Pacific Amphitheatre in Costa Mesa. For more information, visit litlounge.com.