A New Look at the USC/UCLA Debate 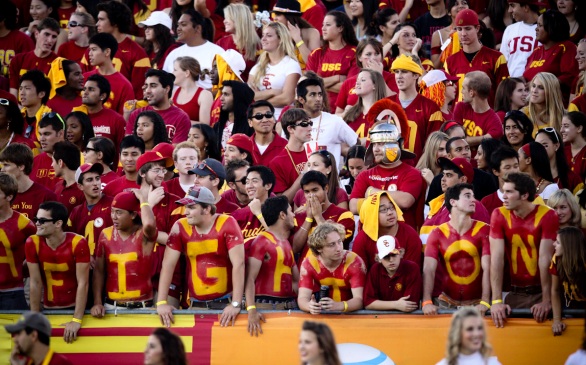 The rivalry between USC and UCLA rages on.
There’s a battle raging between office cubicles. Massive warfare in signage and quick one-liners flows through the hallways between those of the proud yellow and blue, with that of the bloody red. Yes, UCLA vs. USC. It’s on...

The rivalry has penetrated my office space as half of my co-workers come from USC and the other half (proudly) come from UCLA. I know I have my biases, but UCLA is a pretty kick-ass school to go to, and it would be a waste of time of debate why ... it’s a given. But, before I get the blood boiling in anyone from USC, I wanted to take a look at our rivalry from another angle. Not football, basketball or who has a better campus, but through something a little bit more relevant to these seriously depressing economic ties.

What do I mean? I want to talk worth, a side-by-side comparison based on basic research anyone can find through each school’s Web site. I’ll break it down to the cost of undergraduate tuition and admission rates for 2010 freshman. Of course, there’s a lot of nuances in comparison figures including those who received merit or need-based scholarships or whether the monetary figures are exact, but I’m hoping the stats I found will help paint a picture of how two of Los Angeles’ most prominent world-class institutions rate in terms of accessibility.

The figures shown below are according to the 2010 freshman admissions profiles for both UCLA and USC (by the way these figures were based respectively from aim.ucla.edu/enrollment and usc.edu/admission/undergraduate)

So what do these statistics really point to? For me, it provides a quick snapshot of who has been accepted to each university and the patterns that exist between in terms of who gets admitted based on race and ethnicity. Asians and Caucasians make up the majority of admitted freshman for both schools, but Caucasians were the most prominently admitted at USC versus UCLA. UCLA has a higher Hispanic and Asian population, while USC has a higher African American/Black population. Still, it’s hard to really derive anything precise with these stats since upon closer look, the way they group people together is kind of off. It confuses me why USC lumped Native Americans and Pacific Islanders together, and UCLA lumped all Asians together, and why the way they look at race and ethnicity isn’t consistent with how the other school breaks it down. Anyways, I digress.

In terms of cost, obviously UCLA is cheaper (or rather “less expensive”) than USC, but as you can see both schools continue to raise their prices - and UCLA admits far more students than their Downtown L.A. counterparts.

Still, I don’t think there’s a clear winner or loser in this debate. When looking at the admissions figures, it’s disheartening to see tuition rates increase, while the amount of minority students like African Americans, Hispanics and especially Native Americans continue to be admitted in such low rates.

So why did I choose these statistics as the scoring system to which school is “better?” Well, because the idea of “better” is no longer relevant at this moment. What’s relevant is whether people are able to go to school in the first place.

It doesn’t matter the name, the title or who has the best program. Right now, college isn’t a right but a luxury, and it shouldn’t be that way.

When I went to college, I never really looked at these types of statistics, the idea of who was accepted where. I just knew that I went to school and could root for my school’s team. Nowadays, people don’t really have that opportunity.
Article posted on 8/31/2011
This article has been viewed 2973 times.