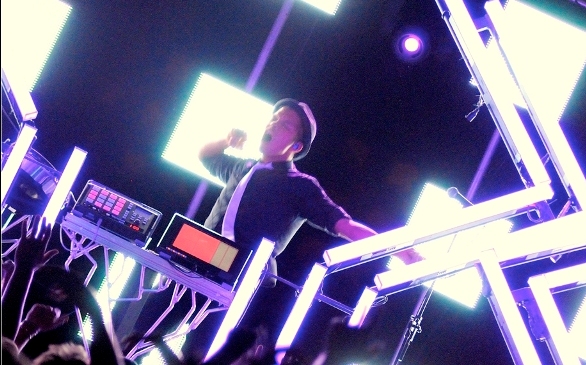 The Glitch Mob’s wild light show went well with their computer-heavy tunage.
(Credit: Mark Smith)
It was a clash of the times at Club Nokia. In one corner we had RJD2, who, with his five turntables and countless records, crafted organic beats without the assistance of computers. In the other corner we had the Glitch Mob, the three-piece group who has made a name for themselves with their bass-heavy electronic grooves that likely require more computers to produce than Apollo 13.

The hybrid crowd was an interesting fusion of drug addled USC undergraduates and 30-something dads, but everyone on board was having a great time. The various levels of Club Nokia helped and hurt the experience for all. If you were lucky enough to get on the floor, you would have experienced one hell of a light show courtesy of the Glitch Mob.

The L.A.-based three-piece has been around for a while, not nearly as long as RJD2, however, but their fans were nonetheless much more enthusiastic about the performance. Opening with their remix of Daft Punk’s “Derezzed” taken off the Tron soundtrack, the Glitch Mob was on fire out of the gate.

Their wild light show would have made deadmau5 jealous and really went well with the techy, computer-heavy tunage. Each member tapped and drummed away to live MIDI control devices with precision and expertise, creating the bass heavy electronic sound they are renowned for.

The party heavy atmosphere was no doubt supplemented by the show’s Friday night timeslot. Regardless, it was a wildly entertaining synthesis of organic and electronic; with high-energy performances by both RJD2 and the Glitch Mob that reminded everyone why they listen to this music to begin with.
Article posted on 8/31/2011
This article has been viewed 1112 times.