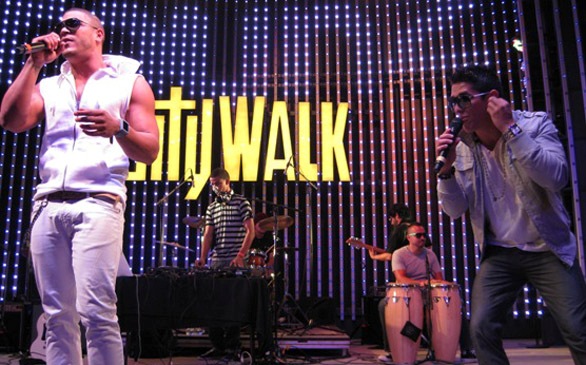 Having received a solid reception in the East Coast and large Latin-American markets, the young duo DS the Evolution opened the night with their urban bachata (romantic ballads from the Dominican Republic). This hotly new sensation sang their most recognizable hit thus far in “Te Ves Fatal (You Seem Fatal).”

Not knowing what to expect, the crowd next witnessed a lovely, ebullient yet bohemian performance from Spanish newcomer Beatriz Luengo. The 28-year-old completely captivated the audience with her diverse beats, rhythms, lively voice and charismatic persona. Her popular “Como Tú No Hay 2” single was a beautiful display of her musical work, which features reggae and pop fusions.

To close the night, Dyland y Lenny was called upon. This Puerto Rican reggaeton duo delivered an upbeat mix to the event, which was filled early. Dyland y Lenny fired first with “Caliente (Hot)” and continued with a romantic singing gesture in “Nadie Te Amará Como Yo (No One Will Love You Like I Do).”

Throughout this summer of 2011, Telemundo and mun2 have brought Latin music to the Los Angeles community every Sunday night in Universal City.
Article posted on 8/31/2011
This article has been viewed 3327 times.