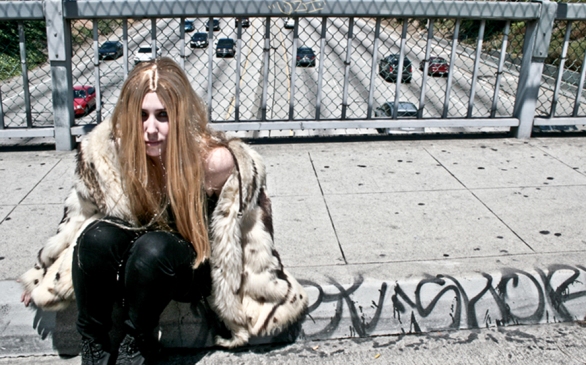 It’s probably fitting that Chelsea Wolfe’s second album opens with a hair-raising, animalistic snarl, the sound of some beastly metamorphosis caught on tape. Wolfe has gone through a bit of a change herself; she’s newly relocated to Los Angeles where the city’s mix of gloss and grit has inspired her doom-drenched electric folk music.

Wolfe’s voice has been described as haunting and haunted, whether by angels or demons is left for the listener to decide. Fans will also have to determine just how they’re going to refer to the new album; Wolfe calls the work ?????????? but says that the 10 question marks are pronounced Apokalypsis. While you’re trying to figure that out, give a listen to the whole album; it’s currently streaming at npr.org.

“The Chanteuse and the Devil’s Muse”

David J, (Bauhaus, Love and Rockets) who brought Silver for Gold, the story of Warhol muse Edie Sedgwick to the L.A. stage, has turned his attention to the story of the mutilation of aspiring actress Elizabeth Short, commonly referred to as the case of the Black Dahlia. In “The Chanteuse and the Devil’s Muse,” David J’s musical framework is melded together with the story of torch singer Madi Comfort, a historical figure in the real case and whose paramour was one of the prime suspects in Short’s grisly murder. “With this production we are revisiting the Black Dahlia song cycle that was originally composed for the independent feature film The Devil’s Muse,” David J explains. “In this new staging I’m reuniting with my original musical collaborator, Ego Plum, and here the music works as a framework around which another related story is interwoven.”

The play actually poses a theory regarding the killer; find out what it is by attending a performance at the Bootleg Theatre Sept. 8-Oct. 1.

Iration Wants You to Get Lei’d

Hawaiian-bred, Santa Barbara-based reggae-rockers Iration have announced the dates for their fall Lei’d Back Tour, set to begin in late September, and singer Kai Rediske is revved-up about the headlining gigs.

“We love bringing our music live to the fans,” says Rediske. “This summer was awesome because we got the chance to introduce ourselves to an even larger audience at the festivals we played, and the response was great! Now we’re getting ready to take it back out for the Lei’d Back Tour. We’re stoked!”

The nearest Lei’d Back stops will be in San Diego in November, but Iration isn’t passing up the home turf completely; the band performs this Saturday at the Shoreline Jam in Long Beach along with Pepper, Soja and Tomorrow’s Bad Seeds.

If you’re still trying to think of something to do this long holiday weekend, how about a party at sea? The Ninth Annual Labor Day Yacht Party, Mini-cruise and BBQ will set sail aboard the Fantasea One Mega-Yacht on Labor Day, Monday, Sept. 5. The fun includes four decks of DJs, karaoke, foosball, ping-pong, barbecue, cabanas, bottle service and VIP service.

Tickets for the four-hour cruise featuring DJ Coolwhip and DJ Armin begin at $35, and that price includes the barbecue. The Fantasea One departs from Dock 52 in Marina del Rey, and you’ll need to check in at 2 p.m. for a 4 p.m. departure. onenightentertainment.biz.

It’s been five years since indie rockers Samiam have put out any new music, but the band that blasted out of Berkeley at the same time as Green Day and Jawbreaker is about to remedy that situation with a new release called Trips. In fact, Trips was recorded at Green Day’s Jingletown Studios, something that Samiam singer Jason Beebout arranged while he was surfing with Green Day’s Billy Joe Armstrong. Trips is said to return to the sound the band favored on their Astray and Clumsy albums, and Beebout explains how the album got its name.

“That word really sums up what the record is about – the journey of life through memories, obstacles and places. Each trip is an adventure in itself and all a part of the whole adventure. Trippy!”