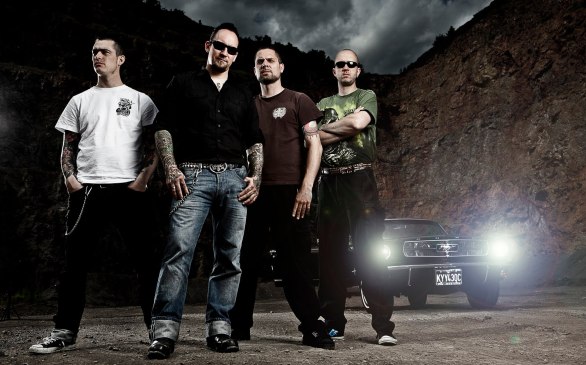 Volbeat’s addicting energy and heavy rock performances have made them into a household name across Europe, and with frequent appearances in North America, they’ve become a hot commodity around the music beat. Their ability to combine rockabilly with heavy metal and punk rock has been a formula for success, instantly winning fans in each city with remarkable shows every night. Currently on their Grand Summer Tour promoting their latest album, Beyond Hell/Above Heaven, the four-piece act stopped by Chinatown while drummer Jon Larsen shared a few words before their sound check.

Although appearing heavily immersed in religious tones and messages from its title, Beyond Hell/Above Heaven is far from it. “Michael [Poulsen] would have a better interpretation about the album title since he came up with it,” comments Larsen about the lead singer. “But as a band, we feel it’s a way of telling our fans and listeners we don’t believe in anything close to Heaven or Hell. To us, it’s a place that exists inside everyone’s heads, and they deal with their personal demons. At the same time, we also leave it up for interpretation. Everyone has a different relationship or feeling towards our albums and music, so it’s always great to hear our fans responses to it.”

When Volbeat played at home in Denmark four years ago, they found themselves opening for Metallica during their World Magnetic Tour, which led to a once-in-a-lifetime invitation to the Big Four Festivals across Europe. They continued supporting Metallica as they headed back to the states, gaining mainstream exposure across venues and arenas in major city markets.

“Contrary to what the media reported, the backstage energy with Slayer, Megadeth and Metallica was incredible. Everyone was getting along, and good vibes were everywhere,” Larsen reveals. “One of the shows we did in Europe, we were actually scheduled to go on after Metallica on a separate stage and we were all intimidated. It was raining and cold, and everyone was leaving after the Metallica set, but when people showed up to our stage it turned out to be an unforgettable show.”

Earlier this spring, Volbeat were featured as one of the performing artists at the Revolver Golden God Awards in Los Angeles. Scott Ian from Anthrax joined them on stage as they played their hit cover of Dusty Springfield’s “I Only Want to Be With You.”

“We haven’t really done any major events outside of Denmark, so playing the Golden Gods was huge for us,” shares Larsen. “Being backstage was amazing, everybody from every band was there, and it still throws me off when I think back and remember that as I left my dressing room, Alice Cooper passed by. Scott had played a few songs with us on tour with his band the Damned Things, so when we asked him to play on stage with us, he was more than excited.” Since introducing their unique and inviting sound of punk rockabilly metal to the world, their wide range of roots and influences has launched them into their own genre.

“We are four very different people, our musical styles are all over the place,” laughs Larsen. “Michael and I have known each other since we were teenagers, and both of us came from the death metal scene. We’ve always been attracted to different musical styles and when we started Volbeat, our songs sounded like Sabbath mixed with the Offspring and Ramones, then the Stones. So we just blended everything together by combining all the music we loved.” With a summer headlining tour and a European tour scheduled right after, they still remain humble and content with their upward success.

“We aren’t a demanding band at all,” chuckles Larsen. “Our low-maintenance attitude has followed us from the start. As long as I have coffee, then I’m happy. Michael loves to drink Gatorade, but we are all really basic when it comes to being on the road. If we can get something to eat, have some water or a few beers with the bands, then we’re good. In the end, if you have all these huge demands on the road, I think it makes people look stupid.”