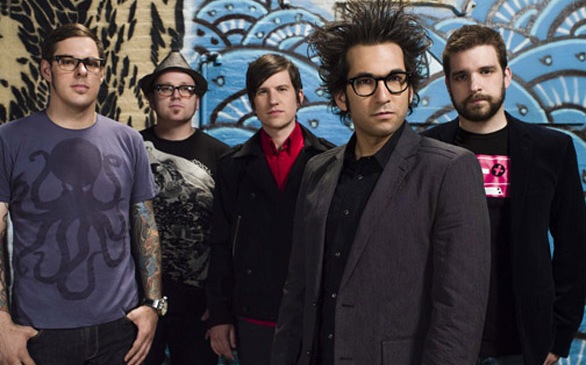 “Somebody google it!” Justin Pierre embarrassingly asks the crowd as he forgets the lyrics and the band comes to a halt about 30 seconds into “Hysteria.” Fans swell into an encouraging applause for the familiar, eccentric-haired and bespectacled frontman dressed in an all-black outfit, who is now quirkily voicing out loud, “Tick-tock, sweat, switch up the fingers, those silly … teenagers?”

A few moments of more nervous chuckles and cheers from fans, someone finally hands him a phone with the correct lyrics “those silly integers.”

It’s a roaring Saturday evening at the House of Blues on the Sunset Strip. The second installment of a two-night event that kicks off their 4 Albums. 2 Nights. 7 Cities, tour, Motion City Soundtrack gathers a diverse group of excited fans that range from the hyperactive 15-year-old girl to the equally amped-up brawny, adult male who jumps up and down to every beat of each track of the band’s two latest albums, Even If It Kills Me and My Dinosaur Life.

Even though Motion City Soundtrack has been active since 1997, the band never lost its youthful energy, holding onto their loyal fan base since their first full-length release in 2002.

“We’ve been through a lot as a band together – being on tour and being through all the troubles trying to make it,” says guitarist Joshua Cain in a pre-show interview. “Anything that ever happened that would make us break up as a band, we got through those things. We like the music that we make and that’s what makes us stick it out.”

Cain describes the band’s long history in a nutshell, “The first record we had our entire lives to write those songs, and we got together and made that happen. The second record was more like, ‘Oh, we got to write a record.’ It was a learning process of being in a band that has to write records. We were a bit under the gun and spent three months doing it. The third record, we were worried about being catchy I think. We ended up writing a really catchy record but didn’t think we did at the time. We’ve always tried not to veer too far away from who we are.”

The guitarist adds, “I think Justin was really angry personally when were writing Commit to Memory, and it shows, you know. He was in a little bit of denial in Even if It Kills Me, and I think it shows that he was in a relationship with alcoholism. As we progress I think that it shows when we’re getting past those demons.”

Pierre’s openness about his struggles only adds to the vocalist’s charismatic stage presence. He shares with the crowd, “I don’t know if anybody can relate to this but it’s really fucked up so I’m just going to tell you. I used to drink a lot, [but] I don’t drink anymore.”

“Thanks! But I spent sometime in an institution, and it was really crazy. I was only in there for like three days. They force you to go outside and be with people. There were these caterpillars, and I was standing under this tree, just watching all these people play volleyball because I didn’t want to be a part of it,” he pauses to look at himself, “in my black outfit.”

“Suddenly there’s a plop, and then plop, plop, plop … And I was like ‘holy shit!’ And I was freaking out and suddenly there were just bugs everywhere. I’ve read books and seen them in movies, they’re delirium tremens. And it’s a real thing apparently.”

The crowd erupts in cheers once again. With a fan base as devoted as this, their fifth effort will surely be met with stellar enthusiasm. Although there’s no official name or a set release date yet, Cain reveals one thing about their upcoming album. “It isn’t more acoustic-y, but it has a lot more of acoustic guitar on it. I think the record spans all the stuff we’ve kind of done. I don’t know, it might be a little more grown up for us? Or maybe not.”