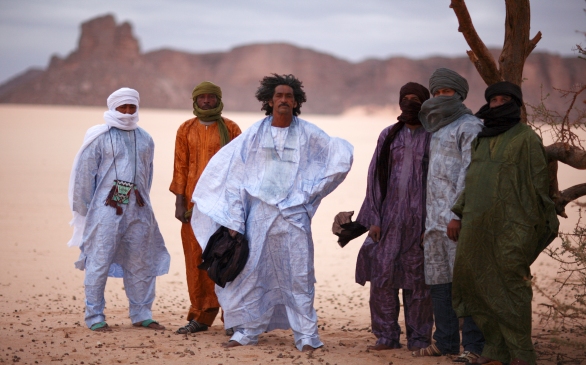 Whether performed entirely on traditional instruments or, in the case of Tinariwen, with acoustic guitar accompaniment, the music of the Touareg people of Algeria is one of the most recognizable sounds emanating from North Africa. It’s one of the most popular styles of world music right now too, ironic since the nomadic Touareg – after enduring decades of war, drought and isolation – are watching their culture slowly disappear as if being swallowed up by the sands of the Sahara in which they live.

Most of the vocals here are sung in the Touareg dialect of Tamashek so you’ll likely not understand a word, but you will understand the emotion; “Imidiwan Ma Tennam” and “Asuf D Alwa” convey a very deep sadness. It is a testament to the group’s ability that “Asuf D Alwa,” despite being nearly funereal in tone, has a chorus that calls for a phonetic sing-along. “Tenere Taqqim Tossam” on the other hand is a joyous love song set to an arrangement that recalls Peter Gabriel’s employment of African sounds; the song again is sung mostly in Tamashek save for a telling line in English, “Oh Tenere, you are the treasure of my soul….”

Nels Cline of Wilco provides some of the delicate acoustic guitar work found throughout and members of TV on the Radio and the Dirty Dozen Brass Band also appear, but the Western players honor this African music; their presence is never a distraction.

Tinariwen perform Sept. 30 at OohLaLA Festival at the El Rey.