“Treat Yourself Like Cary Grant”: Now-Sept. 18 @ The Elephant Lillian Theatre 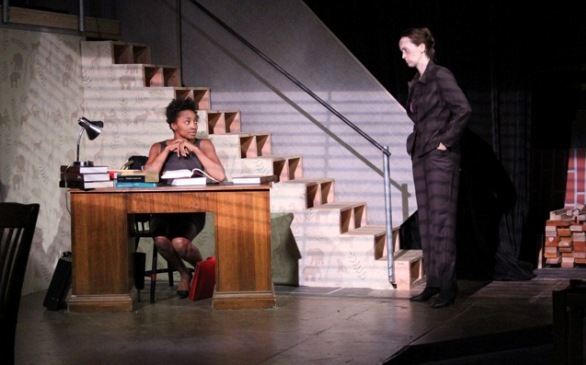 With direction from veteran playwright Rick Pagano and a seasoned cast that boasts a long list of television credits, “Treat Yourself Like Cary Grant” began its run at the Lillian Theater with an unexpectedly lackluster performance. Low in energy and fumbling with minor technical mishaps, it seemed as though the cast and crew were still working out a few kinks in this very new show.

Leads Erin Carufel as Roberta Farraday and Kim Estes as Thomas Kitay made a valiant effort to collectively grapple with the multidimensional struggles their characters presented. The script is very cerebral, and their separate conflicts present the potential for a great deal of mixed emotions. As a result, there is much that is lost in the barrage of sudden mood swings, unresolved questions and blatant references to the films of Cary Grant.

As an homage to the work of Cary Grant, the show pays due tribute to the Hollywood legend, even though the message is completely overstressed in the play’s epilogue. Throughout the course of the show, relevant clips from collected Cary Grant movies are projected on the stage in between scenes. It is an effective tool for developing plot and creating nostalgia, but the projector was positioned directly on an open doorway, used to represent Kitay’s prison cell. Despite the thematic relevance of the projector’s placement, the open door completely destroyed the black and white images, leaving the audience to stretch their eyes and imaginations around a three dimensional blob of classic cinema.

Opening night jitters aside, “Treat Yourself Like Cary Grant” bears the potential to develop into impressive show by the end of its run at the Lillian Theater in Hollywood. A detailed story with a refreshingly simple message, the entire production possesses the ability to develop into a head turning experience, regardless of the aspects of the show that clearly require some ‘smoothing out.’