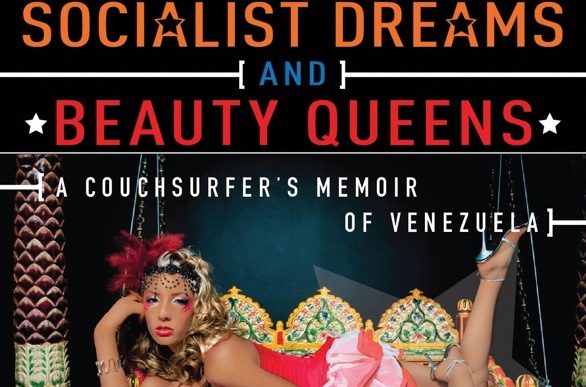 Jamie Maslin is a British travel writer who loves to get immersed in a particular country’s culture in the most down to earth way, by “couch surfing,” which means that instead of shelling out for hotels he crashes on the couches of locals who are willing to have him.

Socialist Dreams and Beauty Queens documents his couch surfing exploits in Venezuela where, in Caracas on his second day in country, he is detained by police because he could not produce his passport, having left it in the apartment of the man he was staying with. The cops used various methods of intimidation on Maslin, trying to get him to bribe his way out of the situation and even at one point threatened to slit his throat. Eventually Maslin’s local host brought the passport to the police station, and Maslin was released to further explore the dangerous city on foot and by bus, often getting turned around and finding adventure where he least expected it.

Maslin marvels at how every woman in the plastic surgery-happy country seems to have had a boob job and reveals that the ubiquitous endowments are even customary gifts for young ladies celebrating their quinceanera. And with Venezuela being run by the colorful Hugo Chavez, politics are discussed throughout Maslin’s trek and a rather lengthy chapter is devoted to an explanation of how Chavez came to power and just exactly who likes him and who doesn’t and why. That portion of the book is a bit serious, but for the most part, Maslin has produced a real page-turner here as he brings to vivid life everything from his time crashing in a reeking house overrun by a dozen cats to witnessing the rare natural phenomenon called Catatumbo lightning to visiting the country’s famous Angel Falls, all with an eye for quirky detail and a liberal dose of humor.