Karen Gillan: Delighted to be with “Doctor Who” 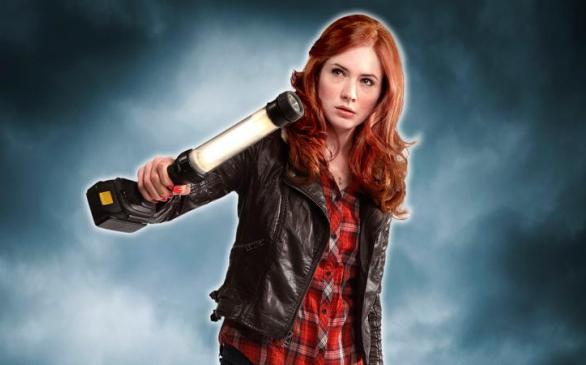 Karen Gillan’s skin color – or the lack of – makes her look like she should be one of the Twilight vampires. It could be an illusion as the redheaded actress wears dark glasses and a long black dress to protect her from the harsh Southern California rays. The Scottish-born Gillan’s ventured into the sun to talk about playing Amy Pond, the latest female traveling companion for the good Doctor (Matt Smith), on the long-running sci-fi series “Doctor Who.” Gillan wasn’t a follower of the series – despite knowing it’s as big in the United Kingdom as Elvis is in America – but she was brought up to speed quickly.

“My mother is a really, really big fan,” Gillan says. “She’s over the moon every day about me being on the show.” Now she knows what it means to be on the show: It’s vaulted her into the upper stratosphere of the science fiction world. “Doctor Who” is the longest running science fiction series on TV dating back to 1963. There have been 11 different Doctors along the way – a regeneration loophole that allows different actors to play the part – and just as many traveling mates.

Ever since the BBC brought “Doctor Who” out of retirement in 2005, he’s slipped through time and space with a female accomplice. Gillan’s Pond is feisty young woman who met the Doctor when she was a little girl living in a small village. She joined him on his time-and-space traveling Tardis to find adventure.

Pond’s more than a travel buddy. It was shockingly revealed she’s the mother to River Song (Alex Kingston), an archaeologist from the future who keeps bumping into the Doctor in the wrong time order. That secret was kept from all the actors – except Kingston – until the first reading of the script.

“The script had a dummy ending and [executive producer] Steven Moffat took us into the hallway to show us the real ending on his laptop. We just started running around and screaming ‘Oh my god!,’” Gillan says. “We just keep getting surprised by the show because we’re in the same position as the fans of the show because we are kept in the dark. Then we’ll read the script and have massive fan moments where we go ‘Whoa!’”

Not knowing is a good thing for Gillan, who says she’s not good at keeping secrets. Gillan was told her life was going to change when she joined the show, but she didn’t realize how much until she and Smith stood before thousands of screaming fans this summer at Comic-Con in San Diego.

“That was insane,” Gillan says. “At one point we were walking down the street and ran into some people who were dressed like our characters, which was quite surreal. Because we were dressed in our normal clothes, they looked more like us than we did.”

She’s happy she’s associated with this series because she hadn’t done too much acting work before it came along. Her previous credits include the U.K. sketch comedy series “The Kevin Bishop Show” and the drama “Stacked.” “Doctor Who” fans first saw her when she played a soothsayer in the episode, “The Fires of Pompeii.” “I hope I’ll be associated with ‘Doctor Who’ forever,” Gillan says.