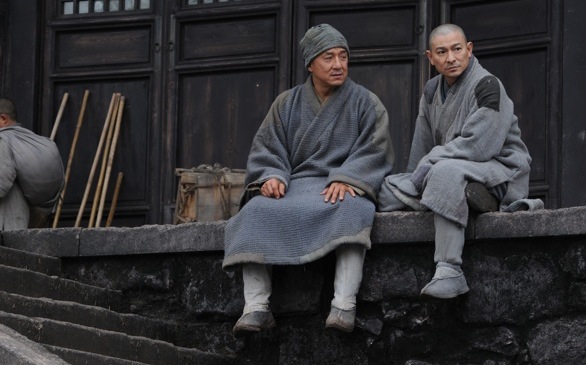 The ultra cool and stylistic Shaolin, directed by Benny Chan, is reminiscent of Drunken Master and is a classic update of The Shaolin Temple, which launched the career of Jet Li. Shaolin, though not as impactful as many martial arts films of the past, definitely does a great job of entertaining and giving off the wow factor. It has refreshing characters that are great and magnify on screen and also features the master himself, Jackie Chan, who is great in a supporting role.

The film is carried by Andy Lau, who is very convincing as the main protagonist General Hou Jie who is fueled by his success on the battlefield. He sneers at Shaolin’s masters after killing a rival warlord on their temple grounds. His glory soon ends, and his own family is wiped out. Hou Jie becomes disillusioned and wanders near Shaolin, until he meets the cook monk Wudao (Jackie Chan), who provides him with food and shelter.

Hou Jie feels guilty for his past; he decides to become a monk and right his wrongs. During his stay, Hou Jie understands and obeys Shaolin’s principles through study and practicing martial arts, mends his ways and finds peace and enlightenment from his heart.

One day, Hou Jie overhears that Cao Man (Nicholas Tse), who has taken control of his army, is oppressing the people by forcing them to unearth Chinese relics. Cao Man is selling the relics to foreigners in exchange for advanced weaponry, after which, he will have the laborers massacred to silence them.

As the civil unrest spreads and the people suffer, Hou Jie and the Shaolin masters are forced to take a fiery stand against the evil warlords. They launch a daring plan of rescue and escape after China is plunged into strife, as feuding warlords try to expand their power by warring over neighboring lands.

The movie has strong storylines and some stunts that will make you jump from your seat in enjoyment. Shaolin stands tall in line with many of the martial arts films from the east, thanks to its stunts and unique action-filled camera work. You really grow to enjoy Shaolin, which at times has touches of Crouching Tiger, Hidden Dragon and Kung Fu Hustle, with a splash of Robin Hood added to it. It’s a bit lengthy, but by the end of the film you truly feel as if you’ve gotten your money’s worth and you leave knowing you’ve seen a truly good movie.

Opens at Laemmle's Sunset 5 on September 9!