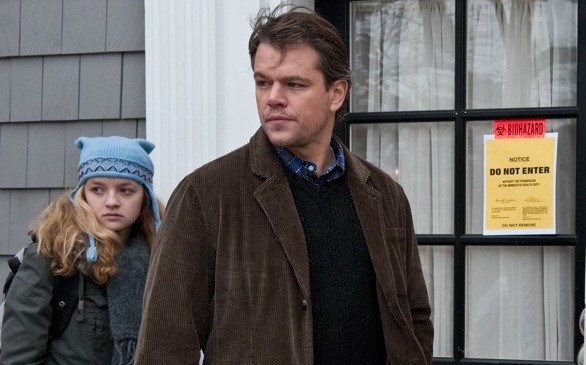 The accolades aren’t limited to those in front of the camera either. Screenwriter Scott Z. Burns is a BAFTA award nominee, editor Stephen Mirrione is an Oscar winner, producer Stacey Sher is an Oscar nominee and set decorator Cindy Carr is also an Oscar nominee, just to name a few. Contagion might be the rare prestige picture masquerading as a popcorn thriller. Or would that be popcorn thriller masquerading as a prestige picture?

Contagion, like Outbreak before it, shows how easily germs are spread. An international traveler reaches into the snack bowl at an airport bar before passing her credit card to a waiter. A business meeting begins with a round of handshakes. A man coughs on a crowded bus. One contact. One instant. And a lethal virus is transmitted.

When Beth Emhoff (Paltrow) returns to Minneapolis from business in Hong Kong, what she thought was jet lag takes a virulent turn. Two days later, she’s dead in the ER (Don’t worry, this isn’t a spoiler – it happens within the first 10 minutes or so.), and the doctors tell her shocked and grieving husband, Mitch (Damon), they have no idea why. Soon, others exhibit the same mysterious symptoms: hacking coughs and fever, followed by seizure, brain hemorrhage and ultimately, death. In Minneapolis, Chicago, London, China, Tokyo and Hong Kong, the numbers quickly multiply: One case becomes four, then 16, then hundreds, thousands, as the contagion sweeps across all borders, fueled by the countless human interactions that make up the course of an average day.

At the U.S. Centers for Disease Control and Prevention (CDC), researchers mobilize to break the code of a unique biological pathogen as it continues to mutate. Deputy Director Cheever (Fishburne) tries to allay the growing panic despite his own personal concerns and must send a brave young doctor (Winslet) into harm’s way. At the same time, amid a rising tide of suspicion over a potential vaccine – and who gets it first – Dr. Leonora Orantes (Cotillard) of the World Health Organization works through the network of connections that could lead back to the source of what they’re dealing with.

As the death toll escalates and people struggle to protect themselves and their loved ones in a society breaking down, one activist blogger (Law) claims the public isn’t getting the truth about what’s really going on, and he sets off an epidemic of paranoia and fear as infectious as the virus itself.

Though Contagion is clearly an ensemble film, Damon might be the considered the central figure. After his wife and young son’s death from the quickly spreading virus, he struggles to protect his daughter and himself from an increasingly violent and anarchic society. Onscreen, Contagion allowed Damon to reunite with former cast mates Paltrow and Law who previously worked together in The Talented Mr. Ripley. Contagion was not only a reunion onscreen as it allowed Damon to reunite with Soderbergh (the Ocean’s 11 films) and with screenwriter Burns (the Bourne films).

Fishburne famously exclaimed that he was happy to be offered a smart movie, and Damon agrees, “We were getting ready to do something else, another project that we’re still going to do, and Steven [Soderbergh] called and said ‘I’ve got this other thing, but we’ve really got to make it now. It’s really timely, and I think it’s the best thing that Scott [Burns]’s written,’ and that’s saying quite a bit. We obviously think a lot of Scott. He [Soderbergh] sent it [the script] over to me with a note that said ‘read it and then wash your hands.’ I read it and had the same reaction that [everyone else] did. I really want to be in this movie. It’s just a terrific, riveting, really fast read and really exciting and really horrifying but managed to be kind of touching too.”

Damon’s been fortunate to have the opportunity to play a wide range of roles, from action to comedy to drama. He claims that he has no preference as to what kind of role he prefers, that “if the director’s good and the script is good, then it all comes together naturally.”

He goes on to say, “Steven’s movies don’t leave any fat on the bone. They’re lean and fast. For a subject like this, that pace mirrors the progression of the infection itself and how things spiral very quickly out of control, so you want that sense of acceleration. He knows exactly how to keep multiple threads alive and cut back to each one at the right time. The story really moves.”

We’ve been inundated with killer aliens and comic-book villains at the multiplexes lately, which can make for good entertainment. However, there is no real sense of danger since they don’t pose a plausible threat to our personal well-being. Viruses, on the other hand, are very real and very scary. According to the CDC, there is a new virus discovered every week. Yes, that’s not a typo. Who can forget the health scares from the H1N1, Ebola, Swine Flu and SARS outbreaks? Heck, it wasn’t all that long ago – 1918 – that the Spanish Flu epidemic wiped out 20 percent of the Earth’s population.

This is something that Damon is well aware of.

“With kids, I’m probably more protective than I’ve ever been. My wife’s nickname for me is ‘red alert.’ I’m like checking the kids to make sure they’re still breathing. I have a tendency to be overprotective without trying to be a helicopter parent.” Damon continues, “It [the role] was very easy for me to relate to, being a dad myself. Even though they’re going through this extraordinary experience, they’re still dealing with typical issues of parents and teenagers. She wants to see her boyfriend, and Mitch keeps trying to impress upon her the severity of the situation and why even the slightest contact with him, if he’s infected, could kill her. It leads to some highly charged moments.”

Apparently, Damon has become a little more proactive as he’s gotten older. His wife wouldn’t call him ‘red alert’ for nothing.

He admits, “after the Northridge earthquake [in 1994], I put the flashlight by my bed for like two weeks and then I forgot about it.”