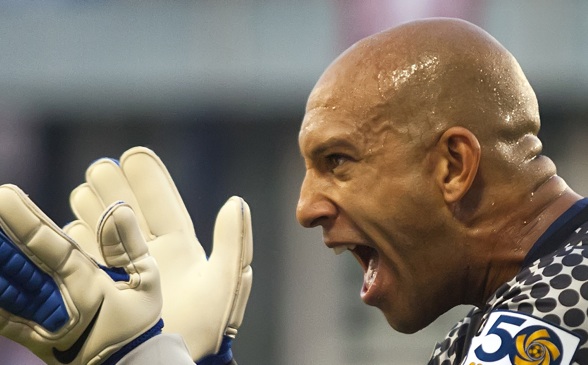 United States goalkeeper Tim Howard
(Credit: David Eulitt/Kansas City Star/MCT)
It was a night like no other in Carson at the Home Depot Center Sept. 2, but the United States men’s soccer team still could not find a win with new German head coach Jürgen Klinsmann before about 16,000 fans in attendance. The U.S. experienced a 1-0 shocking loss at the hands of visiting Central American nation Costa Rica in an international friendly and are now 0-1-1 in the Klinsmann era. Klinsmann, who by far is one of the most charismatic individual on the face of the earth, remains optimistic.

“I never like to lose a game, but it was a very good performance. I was pleased with the way the players tried to implement all the work that we did on the training field throughout the week. The players are starting to learn what it means to play your way through and keep a high tempo and a high pace,” he says during the post-game press conference.

Costa Rica managed a goal by substitute Rodney Wallace in the 65th minute, just four minutes after he entered the pitch. Wallace, a 23-year-old forward who plays for the Portland Timbers, scored on a header after a series of rebounds. His first goal came in his national team debut.

The United States held two clear chances to collect goals early in the first half but could not capitalize. Individual shots from forwards Jozy Altidore and Landon Donovan landed just away from the goal. It gave a scare, however, to the Costa Rican goalkeeper Keylor Navas.

“I felt really good about my performance tonight and the team’s performance,” Donovan states. “Unfortunately, if I’m honest I have to take a fair share of the blame for missing a chance early and we fell asleep on a play that made the difference in the game. Overall, it’s hard to be upset with how we played. We just have to be a little bit better in front of both goals.”

Klinsmann implemented a 4-3-3 attacking system on the night, with Maurice Edu as the defensive midfielder and Donovan the attacker. Altidore was the central forward, with Robbie Rogers and Brek Shea on each flank.

“I feel pretty good in that role. I think that comes down to the guys I have in front of me. José [Torres] and Landon did well to get on the ball and create, and that made my job a lot easier. It takes some of the pressure off me. They wanted me to break-up plays and get on the ball to start the attack,” comments Edu.

“Every game you learn a lot things. The players come away from this game with a lot of good information,” Klinsmann says. “Every situation they saw out there was different, and it was a challenge for them. For example, [Álvaro] Saborío as a center forward is a handful, and I think Michael Orozco learned a lot today.”

Costa Rican striker Saborío gave the U.S. defense a lot of trouble, but he was shutdown on the night.

Each squad saw three different yellow cards in what proved to be a rather physical and intense match sporadically.

“They get frustrated because you have the ball, and we’re having most of the attack on their goal. They try to slow the game down by fouling, but I think we did a great job handling it,” U.S. midfielder Torres says of Costa Rica during the mixed zone interviews. Klinsmann did not use five subs, which included GK Bill Hamid, Clarence Goodson, Jonathan Spector, Jeff Larentowicz and Tim Ream. U.S.A. plays Honduras on Oct. 8 in Miami at the Sun Life Stadium.

“We know what to expect once we go down to the qualifiers in Central America and play those countries,” Klinsmann reveals. “It’s a very hot tempered environment. It will be very physical. There will be some very emotional situations there and it’s part of the game. We will be prepared for that, and we will be prepared in a way to stay calm and cool and just continue to play our rhythm and our game. If you keep that tempo up you will eventually create some chances.”