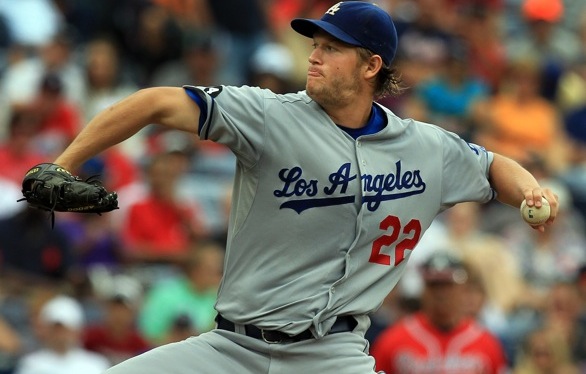 Clayton Kershaw of the Dodgers
(Credit: Curtis Compton/Atlanta Journal-Constitution/MCT)
With three weeks of baseball remaining, manager Don Mattingly should have one thing in mind for the rest of 2011. That is to reach and surpass the .500 record mark with the L.A. Dodgers. They are just oh so close to getting there.

Certainly their series finale loss to the Braves in Atlanta did not help, but their six-game winning streak prior to that sure did. Of late, the Dodgers have been playing solid ball on the diamond.

Los Angeles has Cy Young and MVP candidates in left hander Clayton Kershaw and center fielder Matt Kemp, respectively, a solid load of young talent and a rather promising future, believe it or not. Nevertheless, their past and current on-paper struggles have taken over their once prestigious and prominent image in Major League Baseball. Now, all they have left is capturing and climbing over the .500 win-loss statistic in order to prove one thing: They are still in the game.

Six of the team’s losses in the month of August came on the road against the Milwaukee Brewers and Philadelphia Phillies. Both the Phillies and Brewers are en route to making the postseason with great defense, consistent offense and superb pitching. The Dodgers did not care, though, as they played each game with determination. Los Angeles’ losses were by or less than three runs.

The Dodgers swept the Houston Astros, St. Louis Cardinals, San Diego Padres and nearly swept the Colorado Rockies, Arizona Diamondbacks and the Padres yet again. Having won two-of-three in Atlanta against the Braves, the Dodgers find themselves in good shape to gain an overall mark of over .500.

But why not the Wild Card? L.A. is less than 15 games behind Atlanta.

The Dodgers are continuing their road trip with stops in Washington and San Francisco before hosting the Diamondbacks, Pittsburgh Pirates and Giants at Dodger Stadium.