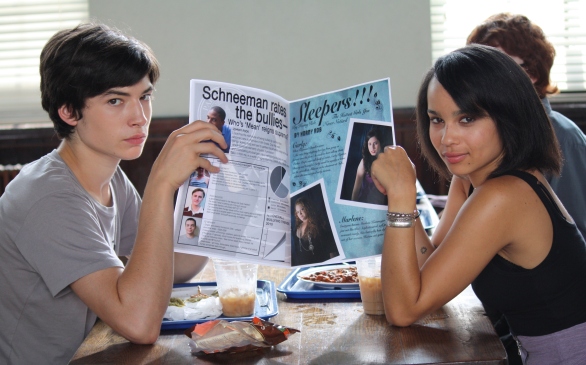 Indie high school flick Beware the Gonzo has a lot going for it: a fresh-faced director inspired by his own compelling teenage life experience; support from the industry fairy god mothers at Tribeca; a New York-set; a Hunter S. Thompson-themed plotline dusted with a contemporary twist; and a charming cast that includes a dead ringer of a less glittery Robert Pattinson and a lucky winner of the unnaturally fine, Hollywood gene lottery pool.

“Seeing the title, I was immediately sold,” says the film’s star, through a somewhat awkward videoconference from New York to Los Angeles. Wearing the effortless hipster uniform of battered T-shirt and tight-fitting jeans, Miller doesn’t stray too far from his character’s look, nor his quirky demeanor. “They are some of my favorite art in the world, [Hunter S. Thompson’s] the Gonzo files. And then I read the script and I was twice sold, if not thrice. I just chased after it. I threw myself at Bryan’s feet and kissed his feet and then begged him for forgiveness.”

Alongside him co-star Kravitz, daughter of musician Lenny Kravitz and actress Lisa Bonet, gives him a confused look. “Wait no … not for forgiveness, but to be in his movie. I did nothing wrong!” Miller corrects himself.

When asked about how the two actors liked filming Beware the Gonzo, it becomes clear that they had as much fun behind the scenes as they had in front of the camera.

“I just remember the party scene, and Griffin getting drunk with the extras,” Kravitz says, referring to her other co-star.

“I think life imitated art a little, and Griffin Newman had sex with everyone,” Miller jokes. “No, that’s not true ... But he’s a very funny kid, and it was very interesting how all the extras became interested in Griffin. They were sort of all after him, and they would be conspiring to get him on the sidelines. One night in general was very crazy because we took over a diner and had a party [complete] with a punk show and a mosh pit.”

“We were hanging out with all these amazing kids and, we got to have a real revolutionary party. There was no ‘extra’ extra. They were all essential,” Miller adds, referring to the actual Poly Prep High School students who were employed by the film.

Kravitz remarks that “it was awesome,” but aside from the fun they had on set, Beware the Gonzo also verges on real adolescent issues that the young actress relates with. Aside from being a Jeff Buckley and Sublime-listening teenager, Kravitz’s celebrity blood didn’t shield her from growing pains.

“I went to two high schools. The first one I went to was a nightmare. It was in Miami, and it was a big, private, clique-y, cheerleader, jock-y thing which was scary to me. And I was the artsy, weird person. I understood feeling like the weirdo. Then I was very lucky to go to art school later, and I had a good time. But just the feeling of being judged and tormented, I understood Evie.”

Miller’s musical inclinations, on the other hand, leaned more towards Immortal Technique and Neil Young. Like Kravitz, however, he found something in common with his character. “I was probably similar in being arrogant in thinking that I was beyond it when really, I was just stuck in it and under its jurisdiction.”

It’s safe to say that the actor, soon to be seen in a film adaptation of Perks of Being a Wallflower with Paul Rudd and Emma Watson, is doing fine now. If he were to have his own newspaper column, he says, “I think I’d like to write strange observations of really tense situations in New York City – like people in intense moment of awkwardness, anger, self-loathing and rage. I would walk around and write about people’s fights and then publish them to their dismay.”

Kravitz, on the other hand, whose character in the movie writes a sex column, opts for a more appetizing choice. “I would write a column about different kinds of sandwiches. [I’d call it] ‘The Daily Sandwich.’”