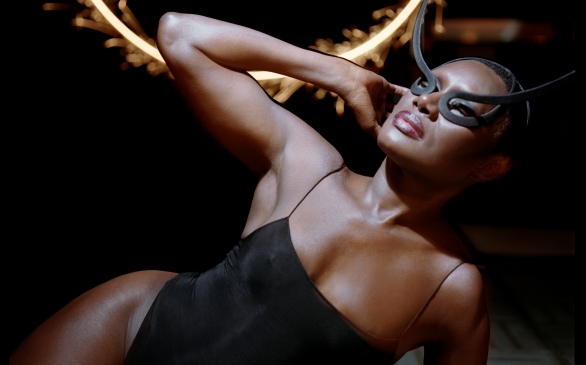 It’s been over 20 years since Jamaican singer and Studio 54 icon Grace Jones graced us (pun intended) with her musical presence. The 63-year-old, once a muse to pop artist Andy Warhol, became notorious for her androgynous looks, lavish acts featuring live leopards and alien couture. This was the ’70s, an era of excess and glam that thrived long before Madonna or Lady Gaga made their blonde ambitions known. While today’s generation of listeners may not be familiar with Jones, her blend of dramatic rock, trance-inducing New Wave and retro disco is one that, like her razor sharp looks, will be difficult to ignore.

Hurricane, Jones’ new album, was already released last year to critical praise overseas, and it’s set on taking over U.S. dance charts this time around. Hurricane opens up with “This Is,” an empowering anthem of using one’s voice “as a weapon.” It’s fueled by tropical dancehall, ensuring that sizzling hot parties last beyond summer. The eerie “Corporate Cannibal,” is a digital horror melody bursting with gripping guitars screeching like nails sliding down a blackboard. You don’t know whether to focus on Jones’ roars or surrender to the song’s echoing electronic beats, which is more frustrating than welcoming.

Fortunately, Jones redeems herself in “Well Well Well,” a tender reggae chant that’s reminiscent of hearing a poet’s revelations inside a smoky nightclub. You won’t know what to do with its message of truth or sorrow, but all you can do is sway in agreement. There’s no doubt that Hurricane is an acquired taste, but rest assured that Jones’ sound hasn’t changed in decades. Now that’s a shock.