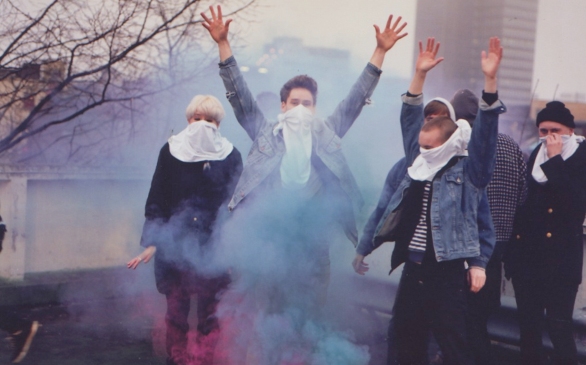 Commonly referred to as WU LYF (pronounced “woo-life”) this band out of Manchester, England has purposely created an air of mystery about themselves by limiting the amount of information they give to the press and general public, and they’ve only recently revealed the identities of the four core members of the band (The line-up has been known to balloon to nearly a dozen for live performances.). This type of gimmickry doesn’t work unless, like WU LYF does, you’ve got a real buzz going with your music and you’ve actually already won half of the promotional battle you’re pretending not to be interested in.

The sound of cathedral organ fades in at the beginning of “LYF” and remains in place as the song moves from the church to the dance floor where a chorus of “Love you forever” confirms that the worshipful church organ is in place for a reason. Much of the album is performed in a musically similar alt-goth vein, but the real hooks here come via the unique vocal styling of Ellery Roberts who sounds something like Bruce Springsteen might if he was singing slightly inebriated and with a sore throat. Roberts strings phrases together with such a disregard for clear enunciation that at times it seems like he’s not singing in English and his impassioned, sing-song delivery sometimes conjures the image of a minstrel imp as if Lucifer really did have a hand in WULYF.

The urgent “Spitting Blood” and the slow smolder of “Heavy Pop” are good places to start with this one; if you like those songs you’ll be able to recognize the treasure in the rest of Go Tell Fire to the Mountain.

Go Tell Fire to the Mountain is currently available.