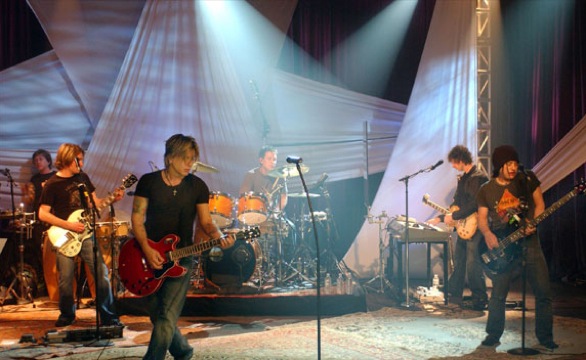 Johnny Rzeznik has this quiet cool about him that I want to figure out. He doesn’t say much to rile the crowd, and really, he doesn’t have to. For years, the Goo Goo Dolls’ soft rock ballads have continued to cause women (and men) to feel warm, inspired and ’90s era nostalgic.

I’m sure they’ve played classics like “Black Balloon,” “Slide” and “Broadway” hundreds of times, including on the last leg of their 2011 tour at the Greek Theatre. Even with their massive popularity, there’s a sense of humility that the Goo Goo Dolls portray on stage. It was in 1995 that their breakthrough hit “Name” was released on radio, and their fans have stuck with them since, filling the 5,700-seat venue.

It was obvious which were the Dolls’ lesser-known tracks, including songs performed by the band’s longtime bassist Robby Takac, who took over the mic mid-show. Fans who follow the Dolls’ discography could appreciate Takac’s performance of “January Friend.” A contrary dynamic to Reznick – Takac’s performance exhibited less crowd enthusiasm. Of course, how do you compete with “Iris” or “Better Days” which have had serious radio play, along with commercial and movie placement? (Remember that Meg Ryan and Nicolas Cage movie City of Angels, definitely a ’90s throwback.)

We sometimes forget how long it has been since the Dolls first hit the radio. It’s one of those rare gifts some bands have to create music that continues to touch their audience throughout time. After all these years, the Goo Goo Dolls’ repertoire of unforgettable rock ballads never loses its grand effect. What is that grand effect? A feeling that love abounds and the world is beautiful. I know, it’s sappy. But it’s a nice feeling to have.