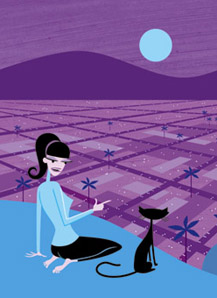 Untitled Document Most will agree that Los Angeles is much more palatable in the evening – there’s less traffic, the smog either dissipates or can’t be seen, those bothersome stars are blotted out by the city lights, the majority of coffee shops close and the heat, usually, abates a bit. Then there’re those especially magical nights where the Santa Ana winds infuse the air with just the right dosage of warmth and you drive with your windows open through the Hollywood Hills, or an empty Sunset Blvd, and truly feel infinite.

This nepenthe to daytime Los Angeles is captured exquisitely by Southern California-based artist Josh Agle, better known as Shag (a contraction of the last two letters of his first name and the first two letters of his last name) – not to be confused with the thespian artist who appeared in Kazaam. With darkened pastel colors, Shag creates panels from a narrative that only he’s read. "Most of my paintings are set in the middle of a story or situation," he says. "The characters are interacting and reacting to each other and to outside events."

We are left to write the pro- and epi-logue to these stories. Saturated with a feel of the 1950s and ’60s, the paintings celebrate consumerism and consumption – characters drink, smoke and eat in lavish, stylish surroundings – but they never feel too accusatory of this lifestyle, rather, it’s Los Angeles as we dreamt it must have been and, hope, exists somewhere at this moment.

If you’ve ever (and if you haven’t, do) gotten lost driving in the Hollywood Hills and suddenly made a turn to find yourself staring down at Los Angeles by night, you’ve experienced realistic renderings of Shag’s interpretive paintings – whether it’s a sickle moon hanging above the Capitol Records building and Cinerama Dome, a swank party taking place across the mammoth bay windows of a lifted hillside home or the lit grid of the city sprawling beneath it. It’s when you remember why you came to Los Angeles in the first place.