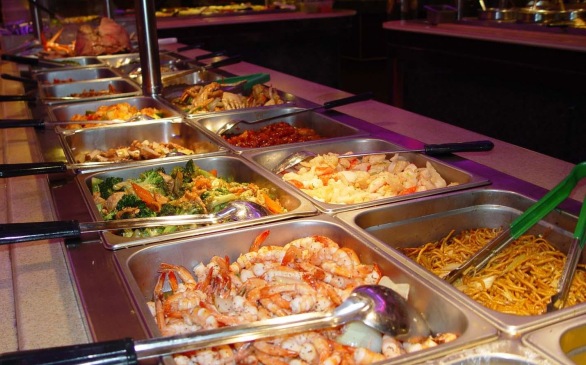 The only buffets I really like usually include a champagne brunch or are in Las Vegas. Under normal circumstances, there’s something slightly off putting about grabbing my food that’s been sitting under a heat lamp or that’s been made privy to less than pristine conditions – dirty hands reaching in, the sneeze guard not quite covering the food, I think you catch my drift. Well, the other day my friends were raving about a buffet they found in the heart of Los Angeles, King Buffet, which promised to change my mind about all things buffet.

Not only that, but the prices were unheard of, less than $10 for lunch, $11.99 for dinner, $12.99 all weekend long. My first thought was hmm, it must not be that good, I mean the cheapest champagne brunch is about $18 and that includes seafood options! But in the name of all things adventurous, I put on my big-girl shoes and ventured over to Western Avenue.

From the outside, King Buffet is unassuming on the corner of De Longpre Avenue in a strip mall with ample parking that was already packed on a late Saturday afternoon. As you walk in, friendly staff and the familiar smell of buffets – a wealth of different foods blended together to create a soothing aroma – greet you. You’re instantly in front of food, so once you find your seat, grab a plate and get ready to “travel.”

The layout of King Buffet is slightly awkward, the middle sections offering hot food and sushi, and the sides offering salad bar and dessert stations. The Chinese food is what makes King Buffet. With things like sesame balls, coconut chicken, pot stickers and more, King Buffet’s selections are easy to love. If you venture over to the seafood portion of the buffet, you’ll find mussels, oysters, crab legs, octopus and a nice selection of sushi items.

Usually I don’t have high hopes for sushi in a buffet, unless it’s of the Vegas variety, and this was about average. It’s not the best or the worst, but for the prices and the selection of over 10 different sushi, King Buffet does a pretty good job with their offerings. Most of the sushi is salmon inclusive, so if you’re a fan, you’ll probably love the sushi. I will say avoid the lobster roll, not very appetizing at all. I think the key to getting exemplary sushi at places like King Buffet is to grab it right after it is made, or right when the restaurant opens.

My favorites include the salt and pepper fried shrimp, oysters and Rangoon. The Rangoon is pretty much deep fried cream cheese, but it wasn't overly greasy and still had the crunchy texture that a lot of fried foods lack when placed in buffet lines.

I love fried fish, but not so much when I have to debone the fish, and that was quite the task at King Buffet. As was opening the King Crab legs, no proper utensils to do so! Still, where else can you get fresh oysters as part of a buffet?

You know the desserts were the best, and that’s only because they reminded me of the cafeteria at my junior and high schools’ – full of different Jello-s, puddings, cakes and pies. These treats interspersed with Asian delicacies made the dessert section the busiest station.

The food at King Buffet is not particularly delicious, but it opened my eyes to the potential of buffets becoming a part of my dining out regimen. I probably won’t return to King Buffet, but I’ll venture out to the other seafood buffets in the area. Maybe the others won’t have a time limit on how long I get to enjoy my food. There’s a strict 90-minute policy at King Buffet, go over and get charged extra! An hour and a half is a pretty long time to be at a restaurant though, my guess that rule is for those gluttonous customers, and sad to say there were quite a few on my visit.

Still, King Buffet is worth trying at least once, that way you know you have a place to fall back on should you need it!