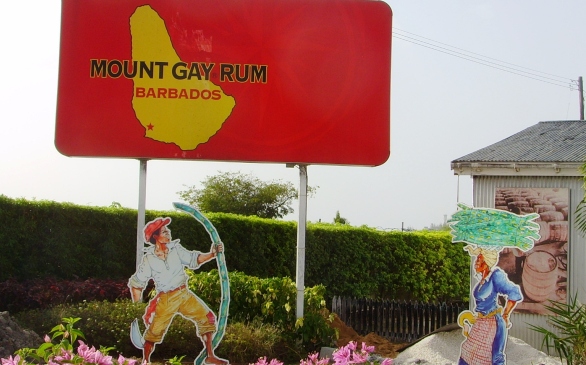 When you’re in the Caribbean and you’re doing something called “liming” what you’re actually doing is … nothing at all. Well, nothing too serious anyway. Liming is a Caribbean state of mind that’s defined by those times when you’re just relaxing and enjoying life. If you’re chatting with friends at the bar, dancing on the beach or enjoying a catamaran ride, you’re liming.

And while liming can refer to any non-work, fun activity there’s one thing that’s fairly universal when it comes to this distinctly Caribbean way of chilling out: rum! Rum is the preferred spirit beverage throughout the Caribbean and not just because the drinks that are made with it – pina coladas, Mai Tais, rum punch – have such a refreshing quality; part of rum’s popularity comes from the fact that it is manufactured in many of the Caribbean countries and drinking it is a local tradition. And nowhere is the tradition honored more so than in Barbados, the place where rum is thought to have originated.

The Mount Gay Rum Distillery, located in Bridgetown on the southwest coast of Barbados, is the oldest rum distillery in existence. The distillery started making rum for commercial sale back in 1703, about 60 years after the process became popular with do-it-yourselfers.

Tours of the distillery last about 45 minutes and are given on the hour all day Monday through Saturday. The tour begins in a small tropical garden where, if the distillery has just done a bottling, you’ll catch your first whiff of rum.

The first stop on the tour is a room done up like a traditional Bajan rum shop where you’ll see tools of the trade, learn about the distilling process and have a chance to sniff pots of different kinds of rums just like customers would have a century ago. You’ll see the actual distilling and bottling equipment and you’ll visit the most-anticipated stop on the tour: the tasting room.

The tour only costs $7 and that includes a taste of several Mount Gay blends, but you can purchase additional shots or mixed drinks in the tasting room if you like. There’s also a well-stocked gift shop where you can purchase a take-home supply or a souvenir T-shirt or cap. One thing you’ll learn on the tour is that rum is made from molasses, and molasses is made from the island’s sugarcane and you can view the cane fields by taking a short drive out of Bridgetown.

Barbados straddles the dividing line between the Caribbean Sea and the Atlantic Ocean, and most visitors prefer the west side of the island where they can play in the warm turquoise waters of the Caribbean. Resorts and hotels to fit all budgets are clustered around Bridgetown, and there’s just about always a big evening dance party going on somewhere that the friendly locals will be able to direct you to.

If you want to try a favorite Bajan culinary treat then head to the Waterfront Café, located adjacent to Bridgetown’s Careenage marina, where they have flying fish on the menu. The smallish marina is one of Bridgetown’s main hubs of activity; you can hire a boat just steps from the Waterfront Café to take you fishing or sightseeing, and this spot is also where landlubbers can begin a walking tour of the city.

But a great way to spend the better part of a day is on a driving tour; take the shore-hugging highway north out of Bridgetown and you’ll see mile after mile of inviting coastline and probably catch sight of some very impressive yachts owned by the well-heeled. About half way to the top of the island there’s a turnoff that’ll take you east to the Atlantic side where the scenery is different – rugged and boulder-strewn – but equally as spectacular.

On this route is where you’ll pass through the giant sugarcane fields that blanket the hillsides, some of which swoop right down to the roiling Atlantic. Here, surrounded by the cane, is the perfect place to reflect for a moment on how much of the crop will eventually be distilled into rum at Mount Gay’s facility. This is the place too, if you’re not the one behind the wheel, to raise a big glass of rum punch to beautiful Barbados.