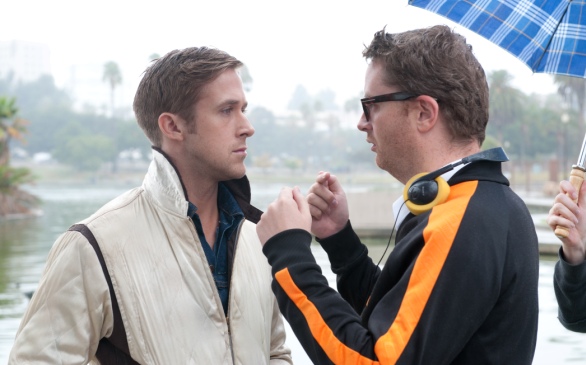 2011 is the Year of Gosling. After missing out on a second Oscar nod for last year’s Blue Valentine by this much (He was previously nominated for Half Nelson.), there’s no doubt the 30-year-old actor will win an Academy Award; the only question is when. Could it be for his forthcoming turn in George Clooney’s Ides of March? Or will Ryan Gosling’s latest film, Drive – a gritty, viscerally violent, nouveau noir tale of a laconic stunt driver and part-time wheelman on a heist that goes horribly awry – be the one that earns him a statuette?

Speaking to him over tea one afternoon in a hotel suite at the Four Seasons, just hours before Drive opened the LA Film Festival, Gosling says he and director Nicolas Winding Refn (Bronson, the Pusher trilogy), known for films with meditative pacing followed by graphic swaths of violence, “creatively effed in my car the night we first met, and we gave birth to a movie baby.”

As bizarrely romantic as that may sound, Gosling says the pair – whose creative coupling Refn has compared to Scorsese and De Niro’s – didn’t hit it off at first.

“We had a terrible first meeting, it was like a bad first date,” Gosling admits. “It was clear that this wasn’t going anywhere, and I just wanted it to be done. And so did he.”

After getting the check early, Refn announced he needed a ride to Santa Monica. They got in Gosling’s car, they didn’t talk and “it was awful, I turned on the radio to fill this terrible silence.” On came REO Speedwagon’s “Can’t Fight This Feeling,” “which I did in a way to piss him off because I thought he wouldn’t be into that type of music,” Gosling says. “But instead, he started crying and singing at the top of his lungs. He started banging his knees and singing, ‘I can’t fight this feeling anymore!’ and crying. And I thought, ‘this is my dude!’”

“[Nicolas] said, ‘This is what the movie is. It’s about a guy who drives around listening to music at night.’ Which is always what I kind of thought it was as well, but that’s not in the script. So when he said that, I knew we had to make this movie together.”

Gosling explains that both he and Refn wanted the film to “put you under a spell,” the same way you feel after a long road trip. “You get where you’re going but you don’t remember getting there,” Gosling grins, adding that cars “kind of hypnotize you.”

“We wanted to make the movie, as opposed to being about looking at the car, we wanted it to be about being inside the car,” he says. “What happened with the film was we essentially drove around all night, listening to music, hanging out, talking about life, movies, watching movies, then making the movie during the day, coming home and editing it. The whole film became a real representation of what making it was like.”

But they also wanted the film, which vacillates between being a touching love story and a gruesome action ride, to reflect some unlikely influences, including Sixteen Candles.

“We both loved John Hughes movies,” Gosling beams, “and we agreed that Pretty in Pink would be a masterpiece if it had head smashing. We wanted to find a way to balance that innocence with violence as well. I was heavily affected by movies I saw when I was a kid. I saw First Blood, and then I filled my Fisher Price Houdini Kit up with steak knives and took it to school and threw it at all the kids at recess because I thought I was Rambo. I saw Rocky and went in the parking lot and picked a fight and got my ass kicked because I thought I could fight like Rocky. What appealed to me about this script, which wasn’t necessarily in the story but had the potential to be in there was that this was a person who had seen too many movies and subconsciously had become some amalgamation of all of them. A self-appointed superhero.”