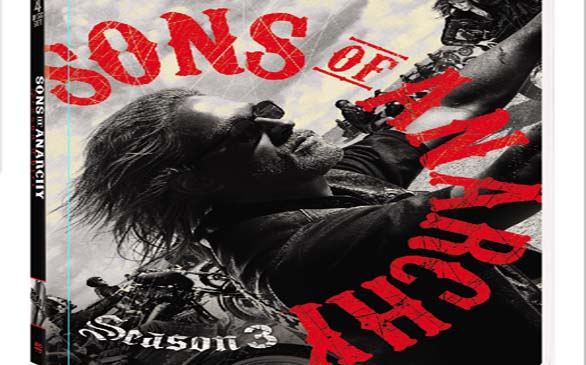 Things get complicated when Jax’s daughter is kidnapped and Gemma is framed for murder in FX’s high-octane motorcycle gang drama Sons of Anarchy: Season Three. Charlie Hunnam stars as a member of an outlaw club run by his parents (Katey Sagal and Ron Perlman), torn between protecting his small town and running guns.

Not your typical legal drama, The Good Wife: The Second Season stars Julianna Margulies as the wife of a disgraced politician (Chris Noth) who takes charge of her life, returning to her law practice. This season finds husband Peter out of jail and staging a comeback. Some great stars make guest appearances, from Michael J. Fox to Jerry Stiller.

Tom Selleck leads a fine ensemble cast as a New York City Police Commissioner and patriarch of a family of law enforcement in Blue Bloods: The First Season. The underrated Donnie Wahlberg plays a streetwise detective with an Assistant D.A. single-mom sister (Bridget Moynahan) and a Harvard-educated brother who just joined up as a beat cop.

Based on the indie comedy of the same name, Outsourced: The Complete Series follows an American man who moves to India when his customer service job is shipped overseas. Unfortunately short-lived, it was one of the funnier sitcoms on TV.

One of “Mystery Science Theater 3000”’s all-time classic episodes Manos: The Hands of Fate comes to DVD in a two-disc Special Edition featuring a documentary on the making of the film.

Sam mysteriously escapes from hell, bringing Dean out of retirement and back hunting otherworldly evil with the help of a gang of hunters made up of their extended family in Supernatural: The Complete Sixth Season 6. Dean soon finds that something isn’t right with his brother.

Available through the Warner Archives online: Before seeing the big screen remake, check out the remastered edition of the original TV Movie of the Week Don’t Be Afraid of the Dark. Kim Darby and Jim Hutton star as a young married couple that moves into a house with a mysterious locked room and unwittingly unleash demonic forces.

Keanu Reeves stars as an ex-con who wrongfully went away for bank robbery and decides to rob the very same bank with help from a seasoned criminal (James Caan) in Henry’s Crime. Vera Farmiga co-stars.

Just about every shot in Orson Welles’s Citizen Kane reinvented cinema. So it’s fitting that it makes its Blu-ray debut with the 70th Anniversary Ultimate Collector’s Edition, a three-disc whopper that includes supplementals galore, along with the Oscar-nominated documentary about Welles’s epic showdown with William Randolph Hearst, and the star-studded dramatization “RKO 281.”

Before the remake hits theaters, sit down for Sam Peckinpah’s original Straw Dogs and prepare to be blown away. Dustin Hoffman gives a remarkable performance as a milquetoast husband being menaced by roughneck workmen. A slow burn explodes into one of cinema’s great climactic endings.

In remembrance of the 10th Anniversary of 9/11, Paul Greengrass’ tense docu-thriller United 93 pays tribute to the bravery of the hijacked flight’s passengers.