Tragedy in Norway: Through a Foreign Student’s Eyes 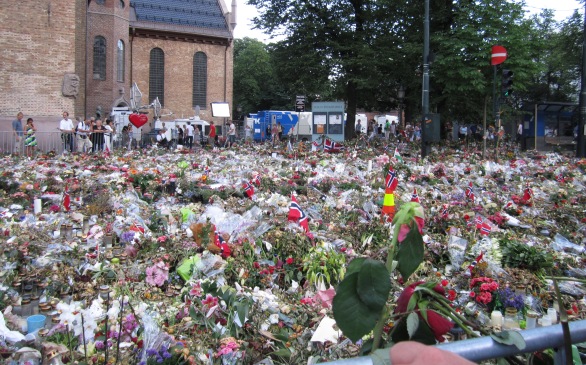 A sea of flowers, flags and messages outside of Oslo Cathedral (Oslo Domkirke)
(Credit: Natasha Desianto)

The streets were filled with broken glass. Rubble. The burned out husk of a twisted car thrown like a toy, its underside exposed. It was in the middle of making lunch that one madman’s act of senseless violence rocked our insular world. The phone call came from my best friend’s panicked daughter. There was an explosion in the center of Oslo. The government building had been bombed. A major newspaper, too.

I felt as if I had been stabbed in the chest as a cry of utter disbelief fled my lips and images, mostly throwbacks to 9/11, tore through my mind at random. We frantically flipped on the TV looking for answers, but the channels hadn’t yet picked up the story. We cursed the mundane programming that still carried on as if in mockery of our fears and raced to the newspaper Web sites. Finally the afternoon programming was interrupted with jarring scenes of the carnage. Smoke billowing from distant buildings, the site of the explosions already closed off and evacuated.

A distinct terror creeps in when you’re in a foreign land, struggling to keep pace with panicked reports in a foreign tongue. I had come to Norway specifically to study the language and yet in this moment of shock and awe, weeks of intensive study went out the window as words that once made sense melted into a jumble of fragmented static. Finally CNN and the BBC picked up the story so that I could follow along on my own terms and not rely on the traumatized translations of my distraught Norwegian host.

Scenes captured on a cell phone flooded the airwaves next: piles of rubble in a smoky haze, as its owner navigated a landscape foreign as the moon in the usually safe, clean and benign city of Oslo. It wasn’t long before speculations began to fly as terrorism experts cast out possible perpetrators and an Islamic terrorist group falsely claimed responsibility. Motives were also pondered from Norway’s involvement in assisting the United States in Afghanistan to the expulsion of a Muslim cleric who made threats against the government. If it were a radical Islamic terrorist group, would it change everything in a nation that is decidedly tolerant to immigrant cultures and welcomes refugees from many Muslim dominant regions with open arms?

Then, while a shocked nation’s eyes were turned on the city center, a gunman opened fire at the Labor Party youth camp at Utøya island, indiscriminately shooting teens as they panicked and made for the water, hoping to swim for the safety of the mainland. It was too horrific to fathom. And suddenly nothing made sense. Why would a radical Islamic group target the political party that most championed immigrant rights? This had to be something else entirely.

“This changes everything,” my friend thought aloud. “The prime minister might be dead, you know...” I dropped to my knees, sobbing. Fortunately, this was not the case. Ironically Prime Minister Jens Stoltenberg was working from home, preparing a speech that he was to give at Utøya the next day for the very youth of his party who were now running for their lives.

I’m not a native to Norway like my friend. I was born and raised in America. Yet Norway is the closest I have to a model society, and this tragedy would affect me differently, but no less deeply. This, my second visit to the country, was supposed to be a peaceful summer of study abroad and nature worship. In addition to cramming my head full of language, I wanted to learn about what makes Norway’s welfare state a success, why it has such phenomenally low crime rates and boasts one of the happiest populations sharing the best standard of living in the world. I wanted to bring the message back home to share, perhaps to make socialism less of a dirty word. I share the Norwegian belief that there’s nothing wrong with a society looking out for the least among themselves and that there is something fundamentally wrong with the huge economic disparities that exist in the United States today.

It was in a lecture on Norwegian society dealing with the development of the welfare state that I learned that when one studies the language the word that one becomes most familiar with is likestilling. Equality. It’s the national favorite word. But sadly, the word I heard more than any other this summer, the one that would brand itself into my language center was terrorangrep. Terror attack. This was far from your typical Norwegian summer.

I had been through 9/11, but not in such close proximity. I had learned lessons from the experience. When the news reports begin to blur into one panic-inducing mass you turn them off. You have to pry your eyes away. I finally forced my host from the television.

What was fortunate about the attack was that it occurred during a time when many Norwegians were taking summer vacation. This meant that the government building and other offices nearby were sparsely populated that fateful day. This may explain the low death toll of eight in the city center. Far more injuries resulted from the blast than deaths, and that in itself was a miracle considering the blocks and blocks of blown out windows. Still, the next morning we would wake to the tragic news of the deathcount on Utøya: 76 dead – and apparently all at the hands of one rightwing, Islamophobe extremist, Anders Behring Breivik.

Norway is a small country. It would come to seem as if everyone knew someone effected by the tragedy. In fact, Crown Princess Mette-Marit lost her stepbrother in the tragedy, and so the grieving for the royal family was deeply personal. Norway is also an open, peaceful and some might say, naïve country. Royalty and government officials navigate the public pretty much like everybody else. It’s almost nothing special to meet royalty while running errands around town at some point in one’s life. Officials’ phone numbers and home addresses are listed in the phone book. In a society that prides itself on egalitarianism, elected leaders and royalty are, in essence, no better than the laborer. Even the wealthy, as a general rule, live simply.

Norway also prides itself on being a world conflict mediator and a leader in humane penal systems. Despite the gruesome acts committed by Breivik, a scant few Norwegians would advocate for the death penalty. The maximum sentence that Breivik will receive is 31 years, however, at the end of his sentence should he prove to still be a threat to society, he can be held indefinitely. Norwegian prisons aim toward rehabilitation rather than outright punishment. The focus in Norway tends to be on how society failed the criminal and led them to commit crime, rather than assuming that criminals are irreparable or evil.

With the anniversary of 9/11, I’ve been asked how this event compares although given the circumstances, it compares more closely to the Oklahoma City bombing. One stark difference between America and Norway is the reaction these events fostered. Americans tend to rush toward blame and revenge. Security is tightened, more laws enacted to protect us at the expense of our own individual freedoms. Fear mongering in the media was markedly absent.

The Norwegians are resilient. They met this, the worst attack on Norwegian soil since the Nazis invaded in 1940, with graceful defiance. They went back to business as usual. The attack occurred on a Friday and remarkably, my program, the International Summer School in Oslo resumed on Monday, albeit on a somber note as teachers reflected on the experience with students and a minute’s silence was observed midday with the rest of the country.

That Monday, Norwegians poured into the streets of Oslo in droves to mourn. The procession, arranged by a social media movement via Facebook, quickly garnered support from the Prime Minister and royal family, who joined to address the crowd. Oslo’s residents adorned every street, every monument and public building with roses, the symbol of the labor party, and candles. But more importantly, the Norwegians resolved that they would not change their society out of fear of retaliation from more rightwing fascists like Breivik. Norway’s response can be summarized in the words of its crown prince, Haakon 7:

“Tonight, the streets are filled with love,” he began. “We have chosen to answer gruesomeness with nearness, chosen to meet hate with togetherness. We have chosen to look to what we stand for ... We shall meet every day prepared to fight for the open society that we are so proud of ... The Norway that we want to have, nothing will take from us. We can choose to stand together. It is up to every one of us now. It is up to you, and it is up to me. Together we have a job to do. We will have a Norway where we live together in community with the freedom of belief and expression. Where freedom is stronger than fear ... Tonight the streets are filled with love. “

The streets were filled with broken glass, a violent hate that could have shattered a society. The Norwegians chose to fill those same streets, not with fear, but with love. We could learn a lot from this little northern nation.