“My Name is Rachel Corrie”: Now-Sept. 22 @ The Will Geer Theatricum Botanicum 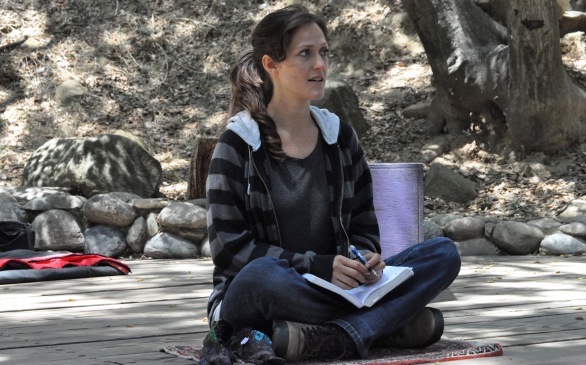 There’s something rejuvenating about good theater; the satisfaction granted after a much-needed dose of well delivered catharsis can be an uplifting experience, to say the least. In this case, this performance, delivered in the calm welcoming atmosphere of a breezy outdoor theater, was nothing short of inspiring.

“My Name is Rachel Corrie,” the much debated, one woman show is derived almost entirely from the recovered e-mails of an American volunteer who was crushed to death by an Israeli bulldozer in 2003. A hotbed of controversy from the very beginning, the play looks to follow Rachel Corrie’s character as she departs for her trip to Gaza, all the way through her death. For those sympathetic to Israel in the longstanding conflict, Corrie’s advocating of Palestinian interests can sometimes be misconstrued as naïve and misinformed.

Regardless of how one’s political views play into the consideration of this performance, what comes across, more than anything, is the heroic story of a girl who lived to be a citizen of the world. Beautifully communicated by actress Samara Frame, Corrie’s character comes off as an energetic and creative soul that wanted nothing more than peace and purpose. Frame imagines Rachel as an off the wall idealist with all the insecurities of a growing young woman who is simultaneously hilarious and brilliant.

Stripped of any source of excessive lighting or stage construction, the Theatricum Botanicum provides a unique space where an elaborate story can be created in one’s imagination. Chalk it up the advice of director Susan Angelo, Theatricum’s adaptation of “My Name is Rachel Corrie” possesses the kind of evocative power it takes to completely remove the audience from that space and time. Transported across oceans, continents and economical barriers the viewer is taken aback with little more than a well-delivered monologue and the story of a girl who set out to change the world.