Eugene Levy: The Actor/Comedian Moves Beyond Baked Goods in The Man 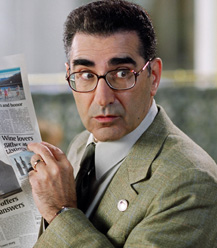 Untitled Document Perhaps it’s that the characters he plays are psychologically picayune in some way, but the first thing that strikes you when Eugene Levy enters a room is how big he is – at 5 feet 6 inches tall with wooly mammoth eyebrows and midnight black hair, the Waiting for Guffman star has an imposing presence. Maybe that’s why it’s believable when, in his new film The Man, he gets away with calling Samuel L. Jackson his "bitch."

"Oh boy, let me tell you, did I enjoy smacking him across the kiester," Levy says, which, using words like ‘oh boy’ and ‘kiester,’ restores him to the better-known Levy. "I’m the only guy in the history of movies that’s slapped Samuel – on screen – and lived to tell about it. He’s a good guy. I love that bitch."

Levy and Jackson aren’t typically found on the same script page, but both found their unique character-actor niche in The Man, a mistaken-identity farce where dental equipment salesman Andy Fidler accidentally gets involved in an arms deal that special agent Derrick Vann should have been "the man" for. The American Pie actor is first to admit that while the pairing is unique, Andy is not.

"It’s in the tribe of characters I do, and they all resemble me in some way. I love to play real people, good people, people the audience will get behind. Most good people get pushed around in their jobs, in life, they’re never the ones that butt in front of other people, but who other people will butt in front of. That’s the real world."

When Levy saw Andy written on the page as a loquacious salesman who just wants to make it to his pitch, he knew it was a character he could manage. Working with Jackson was the other hand in this one-two punch of roles he wants to play.

"I don’t get a lot of mystery, dramatic or action scripts. I get comedies and relationship comedies, and I like doing those. What attracted me to American Pie was the great relationship between a dad and his son. The Man had the relationship thing, and doing it with Sam Jackson, for me, made it a two-hander. I’ve worked mostly with comedy people, my own peers, but I’ve never worked with someone of the dramatic caliber that Jackson is. It was intimidating the first day or two … or week. But other than that, it was a joy. It was great."

While some thespians may dream of their name at the top of billboards, Levy, in his typical mensch style, shrugs that he’s a character actor and that’s what he does. "I don’t usually get the lead in movies, it rarely happens. I just got lucky in this movie to be teamed up with another actor," he says. "I wouldn’t say I’m the co-star, and I’m not the attraction, nor would I say that this is a new direction I’m taking."

Levy’s always interested in going back to a supporting role as long as the picture is decent, though bigger roles, with "more grist on the bone," is something he’s looking to do more of. "I’ve done the other thing, and I’ll keep doing it. I love to come in for quick pops – come in, score, leave and be back on the golf course. It’s great not to have to carry a story or get out exposition, but I am ready for something meatier."

After chewing on that meat, he’ll be sure to floss. The Man marks the second time Levy has worked onscreen in the dental profession, though he claims his DDS in Guffman did not help him here. "I wrote the speech for the dental conference at the end of the film. In the original script, when we got to the scene, Andy was just like, ‘Thank you very much, goodnight. I thought, ‘Boy. He’s been talking about this speech the entire movie, it’s the big thing in his life, it’s too important to just say ‘Thank you and goodnight.’ We need to hear him do what he does and what’s important in his life."

So, Levy got together with his own dentist and worked through a few things. "I thought it was funny that teeth bleaching was the high point in this guy’s life, but for some guys, that is the high point," says the actor. It’s this kind of empathy for the common man that reveals why Levy can get away with calling Samuel L. Jackson his bitch – peck size has nothing to do with it, but it’s what’s underneath those pecks that does.

The Man releases in theaters Sept. 9.