The Man Behind the Facemask: No. 2 Robert Woods 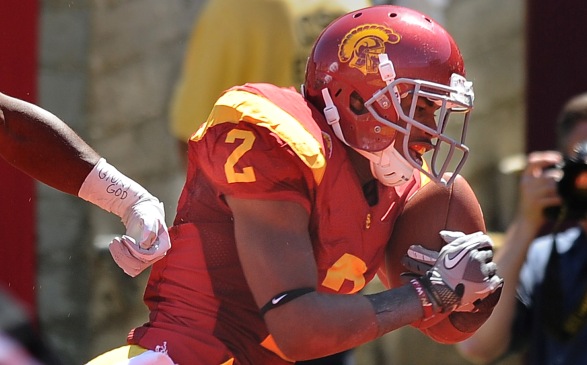 When Robert Woods stepped onto the field on Sept. 3 versus Minnesota, thousands of fans waited to see what he had in store for them. Changing his number from 13 to 2 this season, Woods already broke USC’s record for most catches, with 17, in just the first game of his sophomore year.

Woods surprised all Pac-10 schools last year with his explosiveness and athleticism. He ranks seventh on the USC kickoff-return list (971 yards) and received the 2010 Pac-10 Offensive Freshman of the Year amongst other honors. So what has all this success taught this Carson, Calif. native?

“Stay humble because you’re one injury away from never playing again,” Woods says, “[You’ve] just got to represent SC in a good manner. [Being a football player] is a job … it’s school, football meetings, film, eat, sleep and do it again the next day.”

Woods says that from birth his dad pushed him to play football, and once he understood the game he fell in love and kept on playing. And before every game day, “I listen to rap … I have my game day playlist, and on my wrist I put an ‘O’ for Olivia my sister. Ever since she passed, she is my motivation to never give up or quit.”

Everyone knows No. 2 on the field, but it’s about time fans get to know the man behind the facemask. Woods is majoring in policy, planning and development at USC and has big plans post graduation. “I want to fix up Carson, the city that I came from … I don’t want to say what I want to do because someone might steal my idea,” Woods says laughing.

So where do you catch Woods when he’s not in the classroom or on the field? You can find Woods at home or at the “Palace” as he likes to call it. But before living on his own, Woods was a freshman like everyone else.

“[My favorite memory is] probably my whole freshman experience with my roommates with Dion [Bailey] and Xavier [Grimble] always in my room. Club 304 is what we called it, because everyone wanted to be in our room, and now we’re all in one house so should be fun.” Looking back to his freshman year there were a couple things to get used to, but since he didn’t move far from home he could still visit Carson whenever he got home sick.

“This is a way bigger campus … I got to get use to not seeing everybody. You used to see everybody every five minutes [in high school], here you see them every three months. My roommates they’re pretty cool. I hung out with them, some in even high school,” Woods says. “Dion Bailey especially, I grew up with him since I was 2; it feels good knowing that I have someone here who is like a brother to me. It’s good that I know I can rely on him, and he can rely on me.”

USC is a big campus, but it’s always good to go back to what you know from time to time. So what’s Woods’ favorite movie? Color? Artist? Actress? Actor? TV Show? Song?

“Don’t Be a Menace to South Central While Drinking Your Juice in the Hood. Purple. Young Money. Halle Berry. The Wayans brothers. [My favorite show is] ‘College GameDay’ … ever since I was little, I always liked watching it with my blanket and my cereal. And as for a favorite song? I have a new favorite song every week,” he says, laughing.

Only being 19, Woods is seen as a future icon within USC football and has high expectations for not only himself, but his teammates as well.

“We want to win more games than last year and go undefeated … we were our biggest competition last season. We use our critics as motivation, but it’s our fault we haven’t been playing up to par,” Woods says. “My goals are to do what hasn’t been done before … to be the greatest receiver to ever play the game, because I want to be legendary with my name, and have it live forever and have the things I did live forever.”