I Don’t Know How She Does It: Olivia Munn’s still your girl next door. 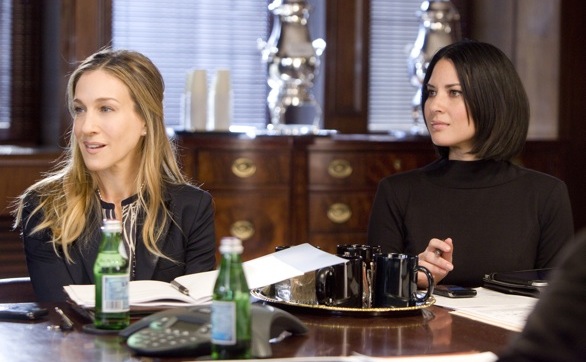 Sarah Jessica Parker and Olivia Munn in I Don’t Know How She Does It
(Credit: Craig Blankenhorn/The Weinstein Company)

Many Hollywood actresses strive to maintain squeaky clean images to complement their disturbingly flawless good looks. Some prefer to create an aura of mystique, a personality so mysterious that one wonders if they even have one at all. Nobody can accuse Olivia Munn of fitting either category. Case in point is her Twitter feed, which lately read: “Went 2 Contagion Premiere 2nite. Go see it, its great!! Then go wash ur hands. And maybe don’t always swallow.”

Despite having the kind of beauty, enough to carry a Hollywood career, the former “Attack of the Show!” host and current “The Daily Show” correspondent is also one hell of a funny lady.

“I found humor from moving around so much and always being the new girl every two to three years … As a kid I was just trying to survive without spending every lunch with the librarian because nobody else would let me sit with them,” Munn laughs.

For someone who has made the sexiest women lists of about every men’s magazine in the last couple of years, it’s hard to imagine that Munn was once an “ugly duckling.”

“I grew up in a big family, and I was the second to the youngest of five kids. We took karate, and I took dance and cheerleading. I have a sister who is very beautiful and she was very girly, and I was just tomboy-ish,” says Munn. “You can go on to any blog that would say ‘Oh, she’s pretty,’ but some would be like ‘What’s wrong with her face?’ [But] I’m very comfortable with my imperfections.”

At the time, she is in New York promoting her newest movie, I Don’t Know How She Does It, which boasts an all-star cast that includes Sarah Jessica Parker, Pierce Brosnan and Greg Kinnear. “It’s one thing for me to be around them because they exist, and it’s another thing for me to be in a movie with them and work with them. The fact that I’m on ‘The Daily Show’ with Jon Stewart ... It’s just mind-boggling to me. Now I’m here hanging out with Sarah Jessica, Pierce Brosnan and Greg Kinnear, and we’re talking about the work that we just did together. I don’t think I’ll ever get over that.”

“Sarah Jessica’s character represents a lot of women today – a mother and a wife who also tries to work and go after her dream. She is struggling with both because she feels guilty in both worlds. Even though she’s an amazing mother and she’s amazing at her job, she always feels like she’s shortchanging someone … The only thing I have in common with Momo is that we are both workaholics and we’re both hardworking, but other than that I feel very close to Sarah’s character. Family, kids and marriage … I know that’s something that I’ll want someday.”

She adds, “The thing that [my mother] always said to me growing up is to never just marry a man and be his wife. Make a name for yourself. Embrace who you are and be a full woman.”

From roles like “Girl No. 1” in a straight-to-video horror film and a stint as a host talking about video games “dressed up in literally every costume” a man can fantasize about, Munn’s career has definitely come a long way, making a big name for herself. But seemingly impervious to her rising celebrity status, the actress speaks in a way that she could still pass as your girl next door.

When asked about her favorite video games Munn answers, “If you find somebody who doesn’t like ‘Halo,’ wow ... I don’t want to be their friend. And also, in the girly, Asian-y way, I’m a huge ‘Tetris’ fan. I feel like I’m a prodigy for ‘Tetris,’ like, 18 years too late. I wish I had a time machine. I wouldn’t go back to stop world hunger or save anybody I knew. I would go back to the day when I was 8 years old and be like ‘Hey, little girl. There’s a ‘Tetris’ competition. Go for it. And I would make that my destiny.”

I Don’t Know How She Does It releases in theaters Sept. 16.