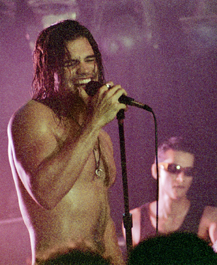 Untitled Document Every now and then, a movie comes along and presents the debut of a performer so gifted, so startlingly vivid, that you can’t help but sit up straighter in your seat, staring in amazement at the screen, scanning the end credits for the name of this talented star-in-the-making. In Undiscovered, that performer is the skateboarding bulldog, playing the role of Tyson, the lead actor’s pet dog.

He’s a rather squat canine who, as his moniker indicates, rides a skateboard all by himself, using his stubby little legs to gather speed, then standing majestically on the vehicle as it glides down the street.

Tyson does this in an almost offhand manner, with the coolness of a young James Dean, if Dean were a chunky bulldog with his tongue hanging out. It’s a pleasure to watch, and an indication of a young performer (well, I’m guessing he’s young – it’s kind of hard to tell with dogs) with a bright future ahead of him.

The rest of the movie? Oh, you would have to go and ask me, wouldn’t you, and ruin my good mood. Undiscovered, directed by Meiert Avis (who’s mostly known for commercials and music videos), might be tolerable for teenagers, but the rest of us should steer clear. It’s a romantic comedy about two young people named Luke Falcon (Steven Strait) and Brier Tucket (Pell James) – and those names should give you your first hint of what kind of movie this is. It’s contrived, cutesy and quickly tiresome.

Luke is a musician and Brier is a model, and they meet accidentally in New York on the subway, and then meet accidentally again, almost immediately, in Los Angeles, because apparently they’re the only two people in the world. They’re attracted to each other, but she sort of has a boyfriend, and the story dithers about for 97 very long minutes.

During this time, we meet various other nice-looking 20-somethings in L.A., including the actress Clea (played by a twitchy Ashlee Simpson, who apparently has a great deal to learn about the power of stillness); Luke’s brother Euan (Kip Pardue); a random Brazilian supermodel (Shannyn Sossamon); and a bunch of extra-bitchy acting students from Clea’s class. None hold any interest.

Avis shoots it all as if it’s a music video (and toward the end, as Simpson sings the song "Undiscovered," it actually becomes one) or as if wiggly handheld shots or merry-go-round swirling cameras can give the material more importance than it’s earned. Unfortunately, it can’t. But did I mention that dog?

Undiscovered is currently in theaters.