We Were Here: Documents the Onset of AIDS in 1980’s San Francisco 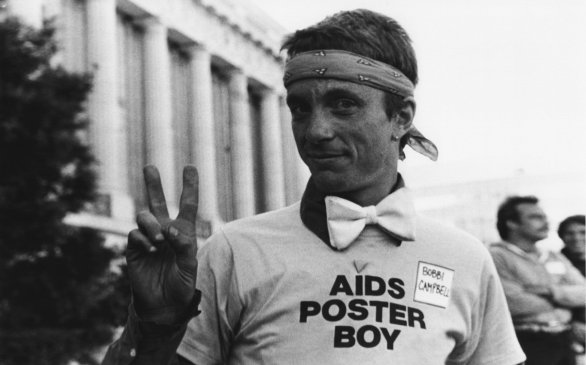 “People went to New York and Los Angeles partially because of career aspirations, people went to San Francisco in spite of their aspirations,” says writer/director David Weissman. His latest documentary, We Were Here, takes us back to San Francisco about three decades ago, a time when the early gay rights movement, led by Harvey Milk, reached its vibrant and most passionate zenith. It was also the time when a mysterious disease, then labeled as the “Gay Plague,” hit the city’s tight-knit homosexual community.

“I moved there in 1976 as a gay young hippie kid and was very caught up in the excitement of what the city was like,” Weissman recalls. “In those years, the gay movement [influenced] the general political and social atmosphere of San Francisco. In those years, I lived through basically everything that the film recounts parallel to what happened in the city.”

The idea for the film didn’t come about, however, until many years later when a former boyfriend, too young to have lived the era and too afraid to ask about it, suggested that Weissman make a movie about it. The result is a documentary that focuses on five people who personally experienced the height of the AIDS epidemic, overall telling a painful yet eye-opening story in a way that hasn’t been done before. From a florist who serviced way too many funerals to a lesbian who cared for AIDS patients in a hospital, each individual gives incredible insight and heart to the documentary.

Weissman explains, “I chose them because they were really good storytellers. I wanted people who lived in San Francisco before everything happened, people who moved to the city because of what it represented to so many types of people – like hope and possibilities. I wanted people who were willing to look inward with the context of an interview and talk about their experiences from a very personal vantage point … Each of them brings a different piece of the history, creating a sense of a much bigger whole.”

He adds, “I think it’s somewhat unusual in its simplicity in how the story is told. There’s no music at all during the interviews. We really wanted to maintain a sense of authenticity and to also not have the feeling of manipulation to really let the power of the story speak for itself … I also wanted the story to be told by a filmmaker that lived through it rather than someone approaching it from the outside.”

So far, We Were Here has been met with great reception from Sundance to the Castro, the San Francisco district spotlighted in the film.

“Sundance was wonderful because it was really the first exposure of the film in an un-gay environment. It was very powerful to see how broadly the movie was having an impact on all kinds of people that had no connection to the subject matter.”

The most gratifying for the director, however, was the Castro premiere. “San Francisco was the sixth character in the film for me. So to have it received in the city that it’s about was very beautiful. We got enormous crowds when it premiered there and lots of young gay men came. It meant a lot to me. It was beautiful to see that range of people in the theater.”

Things have changed since the discovery of AIDS in the ’80s, but the fight for gay rights is still an ongoing battle.

Weissman says, “We are getting so close to having universal same sex marriage. It’s an enormous change that many anticipate, [but] homophobia is something the country is still very mixed up about. There’s a lot of right-wing religiousness in this country and there’s a lot of violent manifestation of it in American society … But certainly for a young person to come out of the closet in their teens at this point is a very, very different experience from what it was 20 to 30 years ago.”

One of this year’s most powerful documentaries, We Were Here is sure to only make greater waves amongst communities, both gay and straight.

“It’s intense. On a certain level it’s uncomfortable to be getting this kind of enthusiasm when there’s so much sadness in it for me personally. But, it’s hugely, hugely gratifying that the movie is impacting people the way it is.”

We Were Here releases in select theaters Sept. 16.