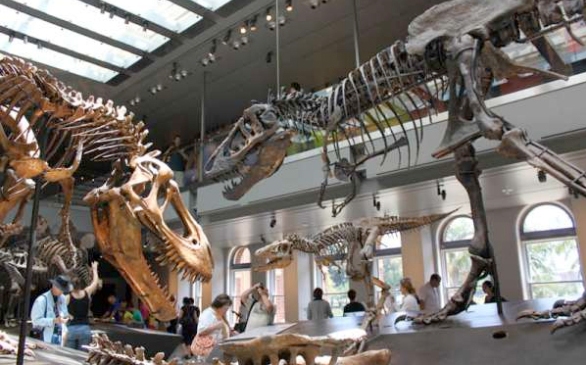 In July, the Natural History Museum unveiled its new Dino Hall. Even if prehistoric specimens don’t fascinate you, the Dinosaur Hall is pretty cool to check out.

Twice the size of its old dinosaur galleries, the hall has some spectacular tributes that are bound to get anyone pretty excited. With the hall’s renovation, it competes for the world’s leading dinosaur hall title with its plethora of individual fossil displays, the sizes of the mounts, as well as the world’s only Tyrannosaurus rex growth series – a truly one of a kind collection. The T. rex Series has the youngest baby T. rex fossil ever found, as well as a juvenile version that helps us understand the fast growth of the T. rex. There is also a sub-adult version that an NHM paleontologist decided to name Thomas. Thomas fascinatingly is one of the 10 specimens of T. rex that is close to being complete (It is 70-percent complete.).

Other than the centerpiece of the exhibit, the new dinosaur hall displays interesting fossils of dinosaurs such as the Stegosaurus and the Triceratops – a dino that has never before been exhibited. Fossils and dinosaurs kind of give me the creeps, but checking out the new hall is totally worth it and should be done just for kicks. Who knows? Maybe you might be just as fascinated as I ended up being.

The Beacon Arts Building is always the best place to go if you feel like walking around in a large-scale gallery. Until the 25th of September, the gallery is hosting an exhibition curated by Suzanne Adelman and Keith Walsh.

Featuring over 20 artists – such as Lisa Anne Auerbach, Aaron Brewer, Kristin Calabrese and Mason Cooley – the group show explores the wonders and dynamics of optimism through art forms that are sure to unveil more than you could imagine regarding the subject. With mixed media, sculptures, paintings and videos, 22 artists come together to present visitors a sort of utopian take on life.

“The poetics of The Optimist’s Parking Lot attempts to remind us of the multifaceted nature of optimism: the challenges of considering a sense of future and possibility – along with its potential detours, waiting and endgames in the context of current events.” As deciphered by the curators of the summer show, perhaps this is the perfect timing to have such a utopian themed exhibit … with all of today’s shortcomings in various aspects, it is at times valuable to believe in hope.