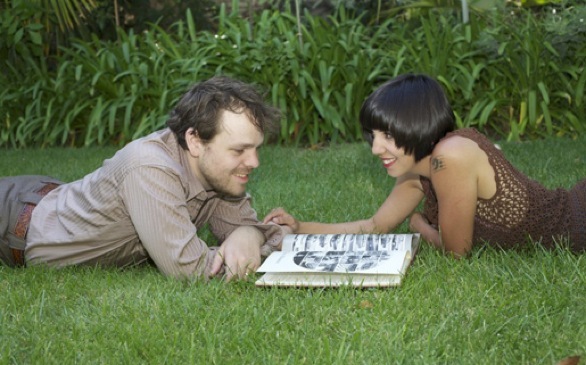 What happens when boy (from rural Nebraska) meets girl (from Los Angeles) and they fall in love? Marriage was the obvious answer for Chris Senseney and his bride Stefanie Drootin-Senseney, who also quickly began a musical collaboration known as Big Harp. And you know what happens next. Along come the little ones: a boy, a girl and the newborn White Hat.

The songs on White Hat are certainly not lullabies, but Senseney (this would be Mr. Senseney) has a relaxed, matter-of-fact quality to his singing style that could surely calm the kids if needed; even songs like “Goodbye Crazy City,” about escaping the unsavory side of urban life, sound like a piece of cake thanks to Senseney’s laidback attitude.

There’s no twang to Senseney’s voice, but there is to the music; “All Bets Are Off” is a mid-tempo Texas swing, “Let Me Lend My Shoulder” is done in a style that fans of Townes Van Zandt will recognize and “White Hat” has a down-home jangle to it, the kind that informs the work of everyone from Merle Haggard to John Prine. Drootin-Senseney plays bass throughout and sings some background vocals, but this is not a duets record; White Hat is about establishing Chris Senseney as a new voice on the western/alt-country scene, and the stories he relates here will have Big Harp fitting in nicely with the Austin set.