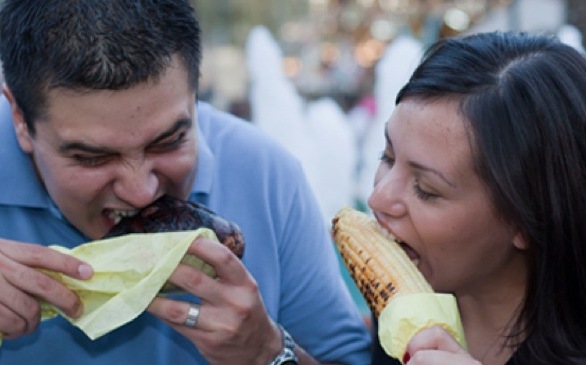 Just a couple of months ago, saying goodbye to the food pyramid and hello to the First Lady’s plate-shaped symbol of healthy eating was hard to accept for many. Some called it “useless,” even a “travesty.” Some went as far as calling it “anti-America.” Yeesh. Leave it to the L.A. County Fair to help us forget all that, or perhaps, momentarily forget health altogether in the way only Americans can. With summer’s last warm gasp of fun, throw caution to the wind and head to the County Fair. Live a little – have some deep-fried Kool-Aid.

From the same people who served us fried Oreos and Twinkies, Chicken Charlie’s brings us their latest creation: Totally Fried Kool-Aid. Having tried this culinary experiment, I must say that, well, it isn’t bad. I might even go as far in describing it as pretty tasty. A batter made from flour and Kool-Aid powder is deep-fried with an end result that can be best described as Kool-Aid-flavored donut holes. Crunchy, sweet and a bit tangy, the balls are sprinkled with powdered sugar and Kool-Aid powder to perfect the unusual concoction.

Have one or two; maybe stop at three, so you can make room for Chicken Charlie’s other delectably indulgent dish, fried barbecue ribs. Served on a plate of French fries, they are just as what you expect them to be: a finger-licking mix of smoky, sweet pork and an addictive, slightly crunchy texture that only a deep fryer can deliver. A healthier alternative, if you are so inclined, is the chicken kabob. Fresh off the grill, the white meat is impossibly juicy, accompanied perfectly by tender green and red bell peppers.

Another standout on the food line-up is Piaggio, which introduces Argentinean cuisine to the L.A. County Fair. Paying a few bucks for the porker sandwich will bring you a grilled prime cut of pork smothered with blue cheese, Chimichurri (green sauce made from parsley, garlic, oil, vinegar and pepper flakes) and roasted peppers, all contained between sliced French bread. The Piaggio truck also offers a mouth-watering Caprese empanada, a mélange of fresh tomatoes, gooey mozzarella and basil stuffed in a golden brown, crispy pastry bread. The plate of grilled skirt steak with a side of French fries is by far the best on the menu. The cut is known for its great flavor, and Piaggio’s skirt steak does indeed melt in your mouth with its savory juiciness. The plate comes a little pricy, but it will be worth every penny.

If you’re looking for a more Far East flavor then Thai Cuisine’s more extensive menu will definitely have something to cater to your taste buds. Their main feature, the original Thai teriyaki on a stick, is your best bet. Smoky with a bit of sweetness and zest, the tender, charred chicken will fill you up. Have it with a side of crunchy, deep-fried spring roll that holds some juicy, albeit greasy, vegetables and some peanut-infused Pad Thai topped with crisp carrots to really complete your meal, all while gulping it down with ice cold Thai tea and tapioca balls.

Of course, aside from deep-fried, barbecued and sugar-covered fair food, expect a riot from this year’s line-up of entertainment. L.A. County’s newest attraction is the Live Shark Encounter, where you can take an up-close look at a 5,000-gallon shark tank as a diver swims with a few of these fascinating creatures of the sea. The Wilderness Ridge will have you learning some lumberjack skills and meeting some “friendly” brown bears. Did watching Rise of the Planet of the Apes leave you obsessed with monkeys? Visit Mojo, a Capuchin monkey, at Mojo’s Jungle together with her kangaroo and reptilian friends. You can get down and dirty with barnyard animals like goats, pigs and a Caspian horse – the oldest breed of horse in the world – at FairView Farms. If you’ve always wanted to learn how to fly a real trapeze, then head to Esmeralda’s Traveling Circus, where you can watch acrobats, contortionists, wirewalkers and fire-eaters do their thing. If that’s not entertaining enough for you, then check out some of the many concerts happening at the fair, like Doobie Brothers (Sept. 22), LeAnn Rimes (Sept. 30) and Earth, Wind & Fire (Oct. 2).